“The world breaks everyone, and afterward, some are strong at the broken places.” – Ernest Hemingway

Alphacution has always been fascinated by the players. Unlike the world of sport, market players have unique potential to influence the field of play, and thus create a feedback loop that influences other players, and so on causing market ecosystem evolution. In this game, the rulemakers and overseers – the referees – are typically playing catch up…

This is not to suggest that markets don’t have naturally occurring limits in addition to those that are imposed by referees. They do. There are always capacity constraints, given performance requirements and performance expectations; and so, we are further fascinated by how players navigate – how they survive, thrive and scale (or not) – relative to the inevitability of market limitations, many of which are currently not well understood.

Throughout these digital pages, Alphacution has plotted a journey to fill this unmet need for understanding –  presenting the output of our fascinations – the stories of market macrostructure evolution told in as vivid and consumable a manner as we could figure out how to assemble. Often, these installments involved some of the most advanced and mythological players operating in common and not-so-common corners of the ecosystem. Nevertheless, it turns out, the factors at the base of it all are few: technology, financial leverage and human nature, including the greed, fear, and bursts of creativity they cause…

In the past, we have explored structural concepts like alpha capacity, alpha capacity elasticity, and the information transmission-reception mechanism that impacts the capacity of outperformance from moment to moment. Sometimes, communicating these ideas required accessing layers upon layers of proprietary research:

Sometimes, we have gone far afield from the mythological to demonstrate the subtle interconnectedness of markets and market actors – and how alpha discovery and extraction efforts that occur closest to the sources of liquidity, as well as the increasingly pervasive industrialized consumption of data, has played a downstream role in influencing a spectrum of traditional investment strategies (and business models).

Not being one of our more colorful stories, you may have forgotten this one: With intense competition to scale assets while delivering consistently competitive performance, some notable players and their traditionally discretionary strategies have been battling at the aforementioned cross-section of performance and market capacities; making increasingly grand justifications over small bps of benchmark outperformance. This has resulted in heightened concentrations in many of the same positions. For example, below, is a 25-year track record for Fidelity where aggregate positions in the top 10 names are now approaching 25% of assets allocated to US equities. (BTW, our research library is littered with charts like these…) 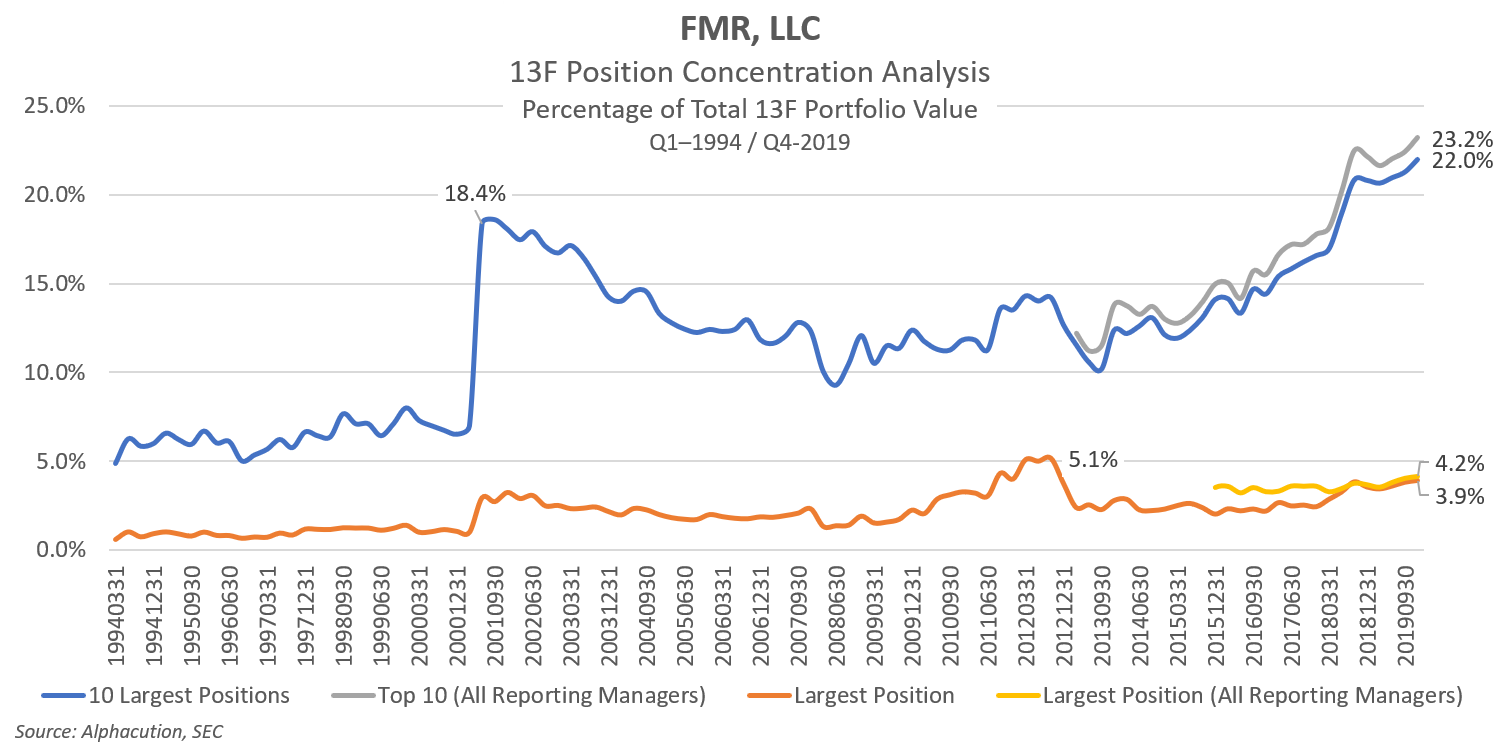 Underneath the tendency towards risk concentration is a global platform increasingly rife with moral hazard where incumbents more easily defend their incumbencies. It’s harder for big guys to fail and little guys to succeed, thus causing the unintended consequence of autotoxicity to permeate the playing field. And so, as the global leverage innovation complex approaches the unknown capacity of its underlying collateral, we have also been keeping a close eye on how the Fed is plugging holes in an economy that appears now to be made of Swiss cheese instead of the one apparently made of Vibranium as described by “the best numbers of our lives” as recently as December 2019: 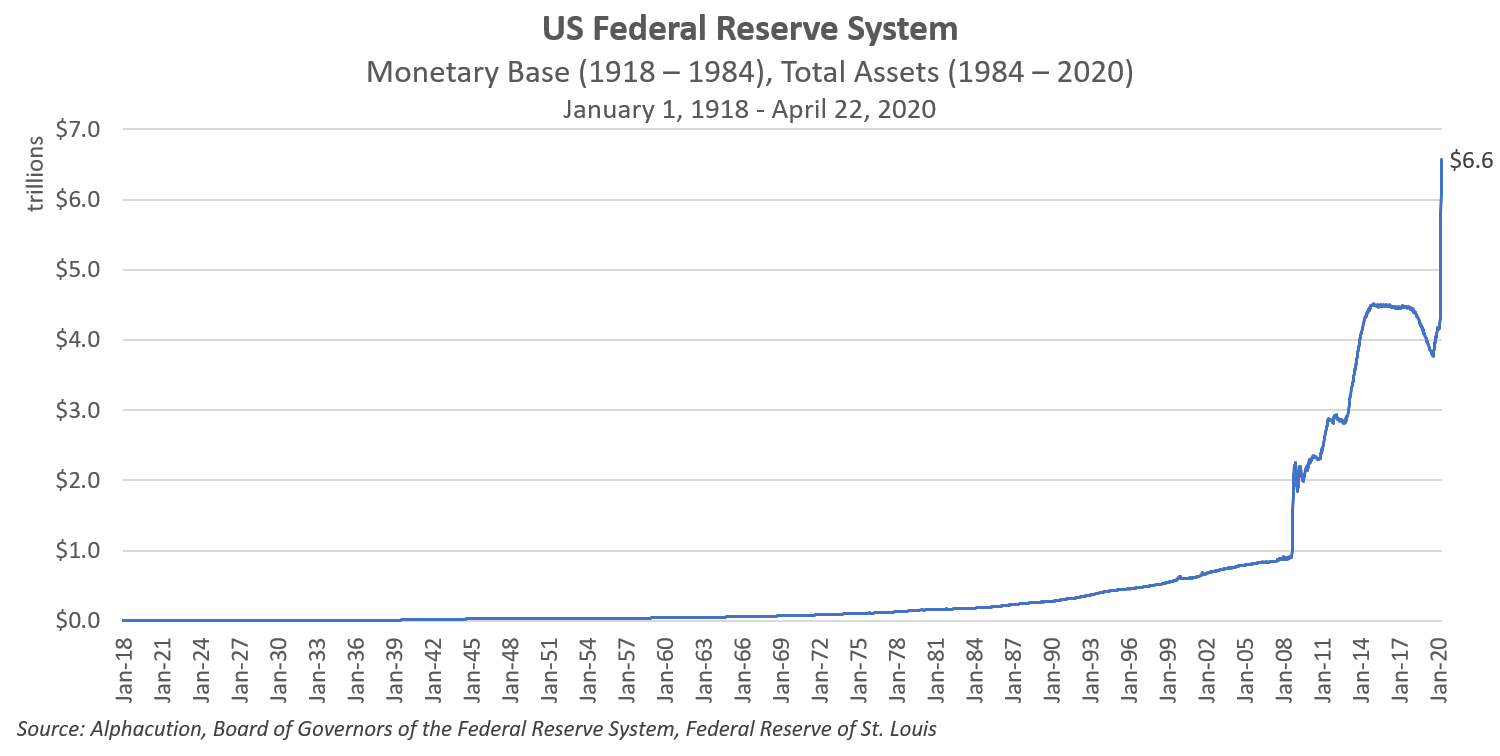 And, as recently as last week, we took a deep dive into the Q1 earnings for Flow Traders to explore some of the first hard evidence following the explosive volatility and volumes in March that will go down in history as representing the opening bookend of the Pandemic Era – and, likely, the closing bookend of the Global Financial Crisis (GFC) era.

There, among many other delicious clues, we were able to illustrate just how hyper-competitive the market making arena – otherwise known in Alphacution’s vernacular as the structural alpha zone – particularly in the US, has become – as implied by the decline in revenue capture rates in an ETF-heavy subset of the US listed securities universe. Clearly, like a three-legged man in an ass kicking contest, firms like Flow Traders are well positioned to benefit handsomely from an unpredictable Volpocalypse or two… 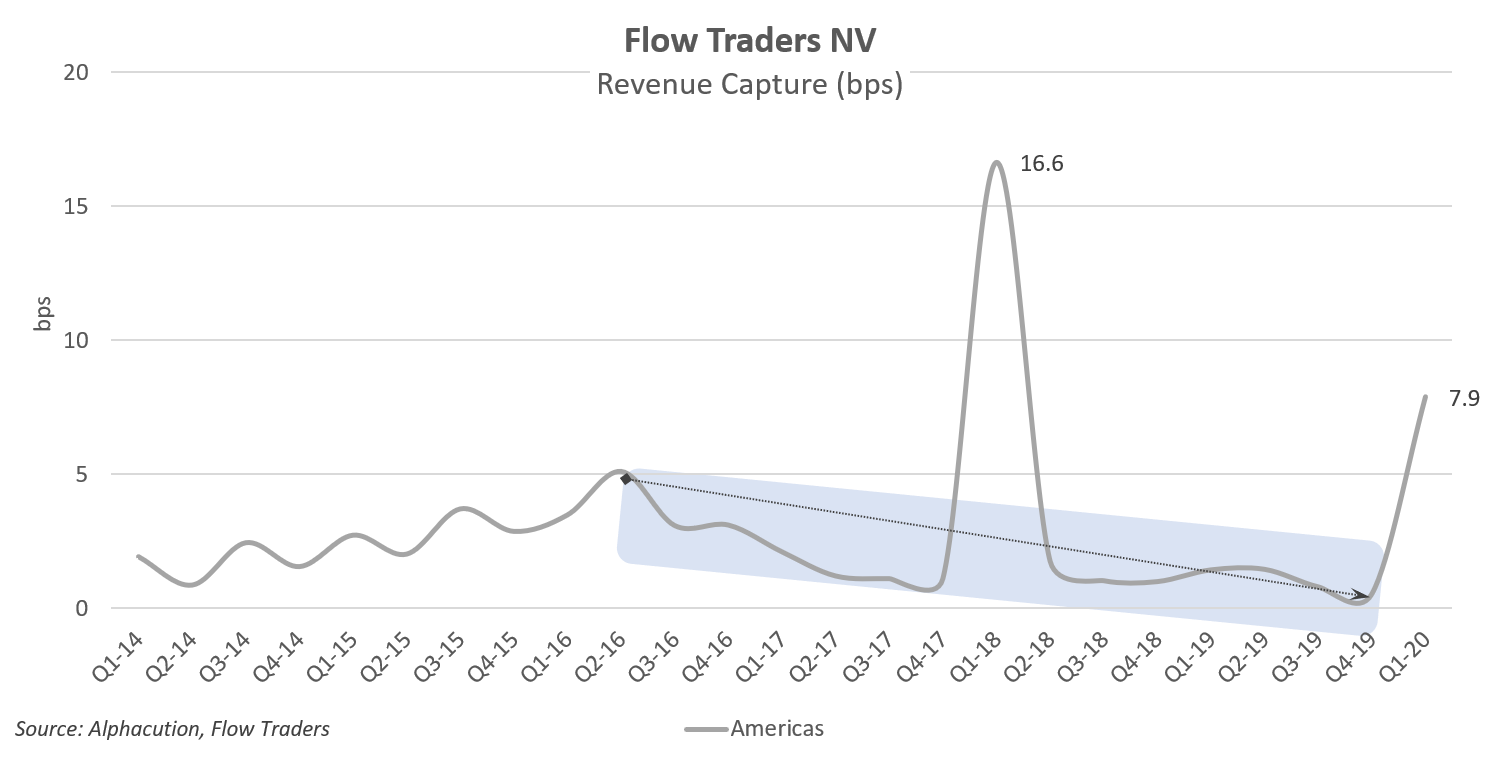 Now, at the risk of seeming unfocused by showcasing what might appear to be a rambling series of non sequiturs, I wanted to take some extra time to present a sampling of themes for this backdrop in order to prime your sensitivity for what follows.

As we have seen with the proliferation of highly-automated, high-turnover strategies starting in cash equity markets, the proliferation of similar tools, methods and strategies in listed option markets is causing similar impacts. (Personally, I believe that those high-performance shops who lead here in the listed option world are playing an outsized role in influencing everything else that happens downfield.)

Coupled with regulatory impediments and competitive dynamics around technology and human capital that have caused bank-owned market making groups to shrink or retreat from these businesses, the continued rise of sophisticated and industrialized proprietary liquidity providers in listed option markets is creating a cascade of efficiencies and opportunities. One such opportunity comes as a result of the gradual reshaping of the value of volatility.

And, given the new economic era we are entering – Swiss cheese, leverage capacity, moral hazard and all – coupled with the intensifying needs of traditional asset management strategies, the subtle shifts in the structure of volatility is worthy of a new level of attention…

According to data from our friends at The Options Clearing Corporation (OCC), bank-owned market making units have gradually ceded market share to proprietary market makers and specialists. Where the likes of Goldman Sachs & Co. (GSCO) and Barclays, for example, have retreated, the likes of Citadel Securities, Susquehanna Securities, Jane Street Options, Two Sigma Securities and a handful of others have played a notable role in engineering that retreat. It seems, only the bulge-bracket Morgan Stanley & Co. (MSCO) remains a lone pole under a tent now populated almost entirely by proprietary trading firms; (thus, btw, continuing to underscore another of our favorite structural themes: The Privatization of Alpha…)

Anyway, the chart below illustrates the past two years of shifting rosters in US listed equity option markets by showing who is responsible for interacting with how much of the volume: (Note: We can demonstrate a similar phenomenon in ETF options as well, but will keep that powder dry for another day…) 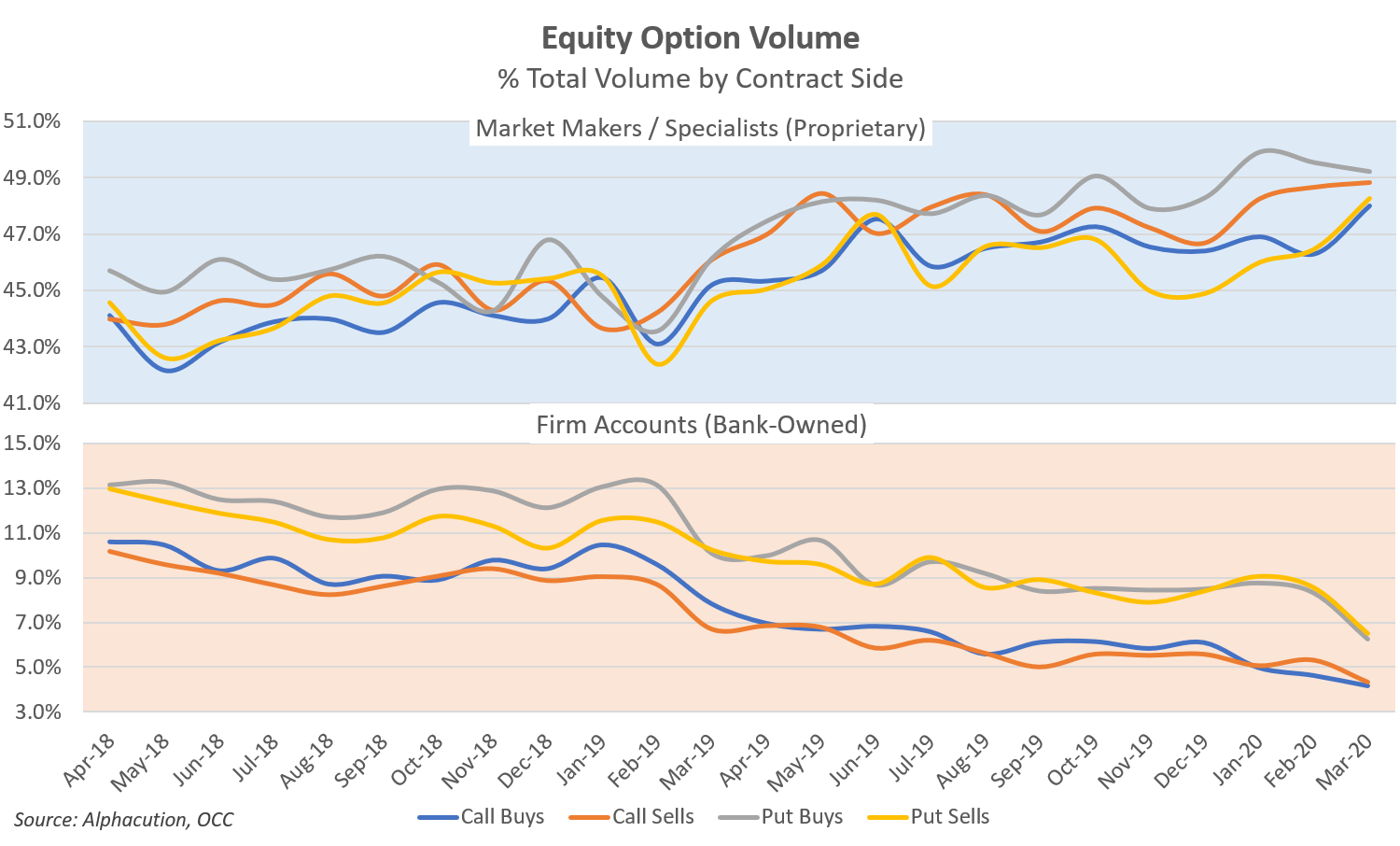 Now, the impacts of these shifting rosters are like a distinct echo from cash equity markets of the Noughties when new high-performance technology arsenals were first aimed at and fired into the capital markets. Then, as now, one clear signal of the impact was the decline in average trade size. The equity option version of this wood-chipper effect, over the past two years, is illustrated below: 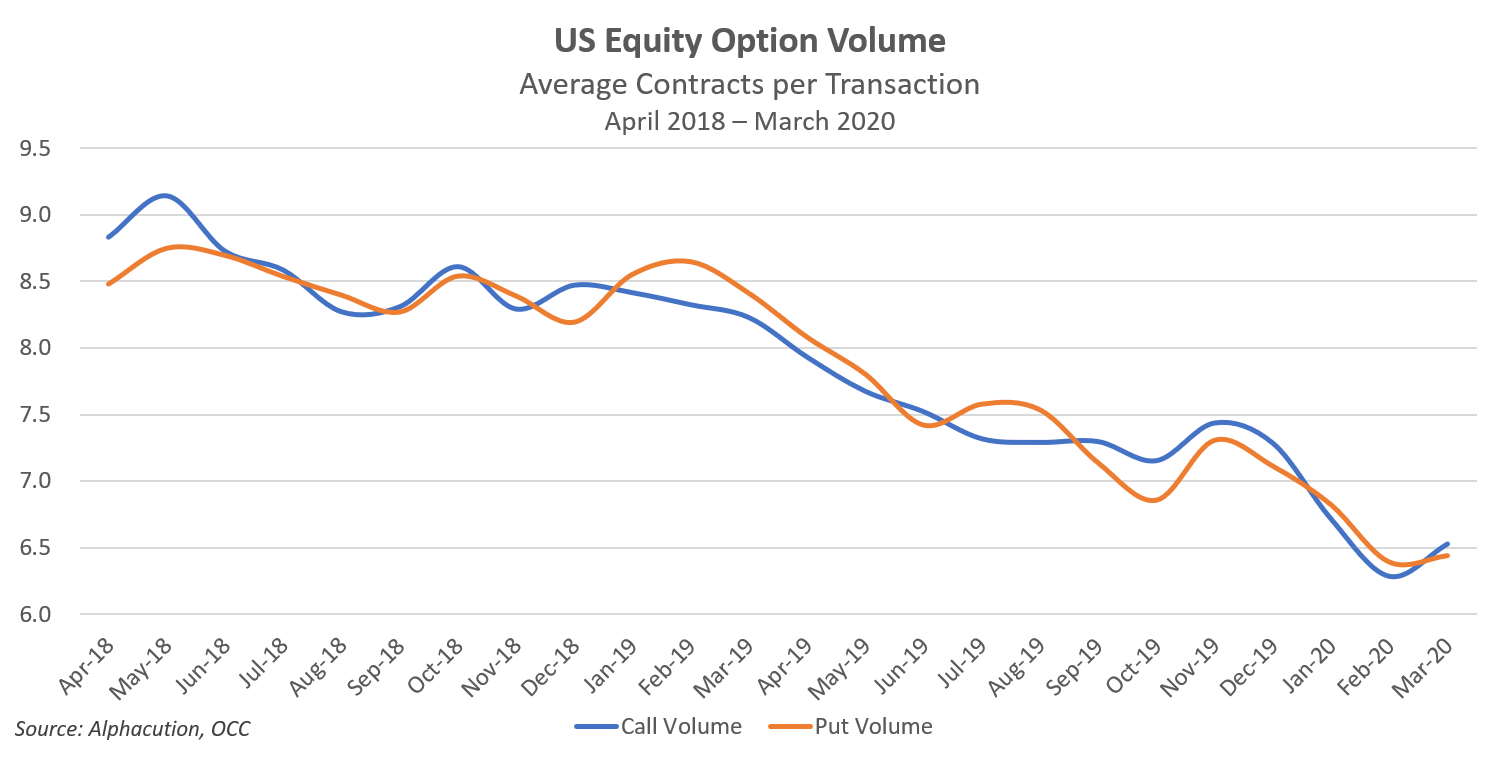 And, like a twin sister, the proliferation of this higher-performance arsenal has led, albeit only recently, to a notably higher market velocity, as measured by the ratio of total contract volume to open interest. Alphacution will be building out a longer time horizon on these analytics to determine whether this is actually a persistent structural phenomenon or something more episodic and volatility-dependent. At minimum, we can say that this market demonstrates a new level of velocity elasticity as a result of the shift in the nature of the supply of liquidity: 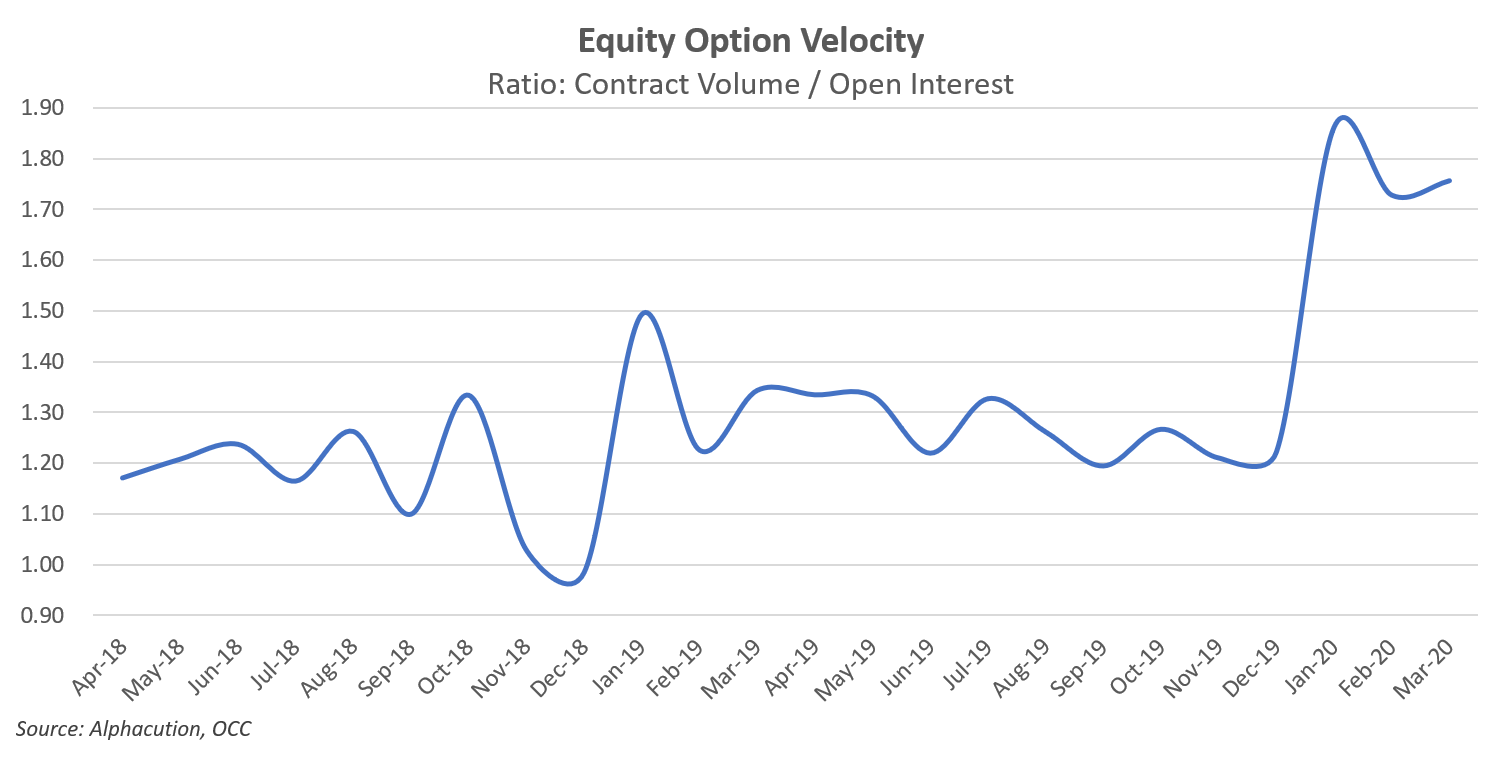 So, like it or not (depending on where you sit relative to this zone in this ecosystem), these are pictures of increasing market efficiency. When leading market makers can price options along with all other products in the asset class (i.e. – cash equities, ETFs, and futures) simultaneously and instantaneously, you can confidently bet that they have become more efficient. (We can argue later – like how my smartphone has an odd awareness to glitch as soon as the contract is paid off – whether this efficiency comes at the cost of other factors, such as market depth…)

This brings us, finally, to the part of the gymnastic routine where we try to stick the landing:

There is some good news here, and it’s timely for those who can use it most. Recall the bittersweet US revenue capture chart for Flow Traders from above. If necessary, reacquaint yourself with our prior work, on management fee trends or  zero-commission trading, for additional support of the idea that technology is essentially disintermediating the vigorish and information asymmetries that formerly provided the sustenance for far more species of creature to survive on this reef…

Now, consider that harvesting volatility – gamma trading – at a time of unprecedented economic uncertainty and potential hardship for all including those with zombified overallocations to the FAANG’s (and despite Herculean efforts by the Fed to do its best impersonation of the fabled little Dutch boy), is one area of this “reef” that is still relatively virginal in the face of the improving value of volatility.

One common example of this subtle structural phenomenon can be illustrated in the spread between historical (realized) volatility on the S&P500 Index (SPX) and VIX implied volatility. To simplify, this is the difference between what the market thinks is going to happen and what actually happened. And yet, this spread says as much about where markets may be going as it does about what market makers need to be paid in order to take the other side of option trades from customers who are typically net buyers of insurance.

With the ability to trade faster and smaller across products of the same asset class – plus the hyper-competitive environment – liquidity providers are able to compete on incremental slivers of spread pricing. In this case, the declining “price” of volatility is illustrated by the declining median spread over subsequently shortened times frames, thus quantifying the gradual impact of efficiencies forged at the hands of the shifting suppliers of that liquidity. 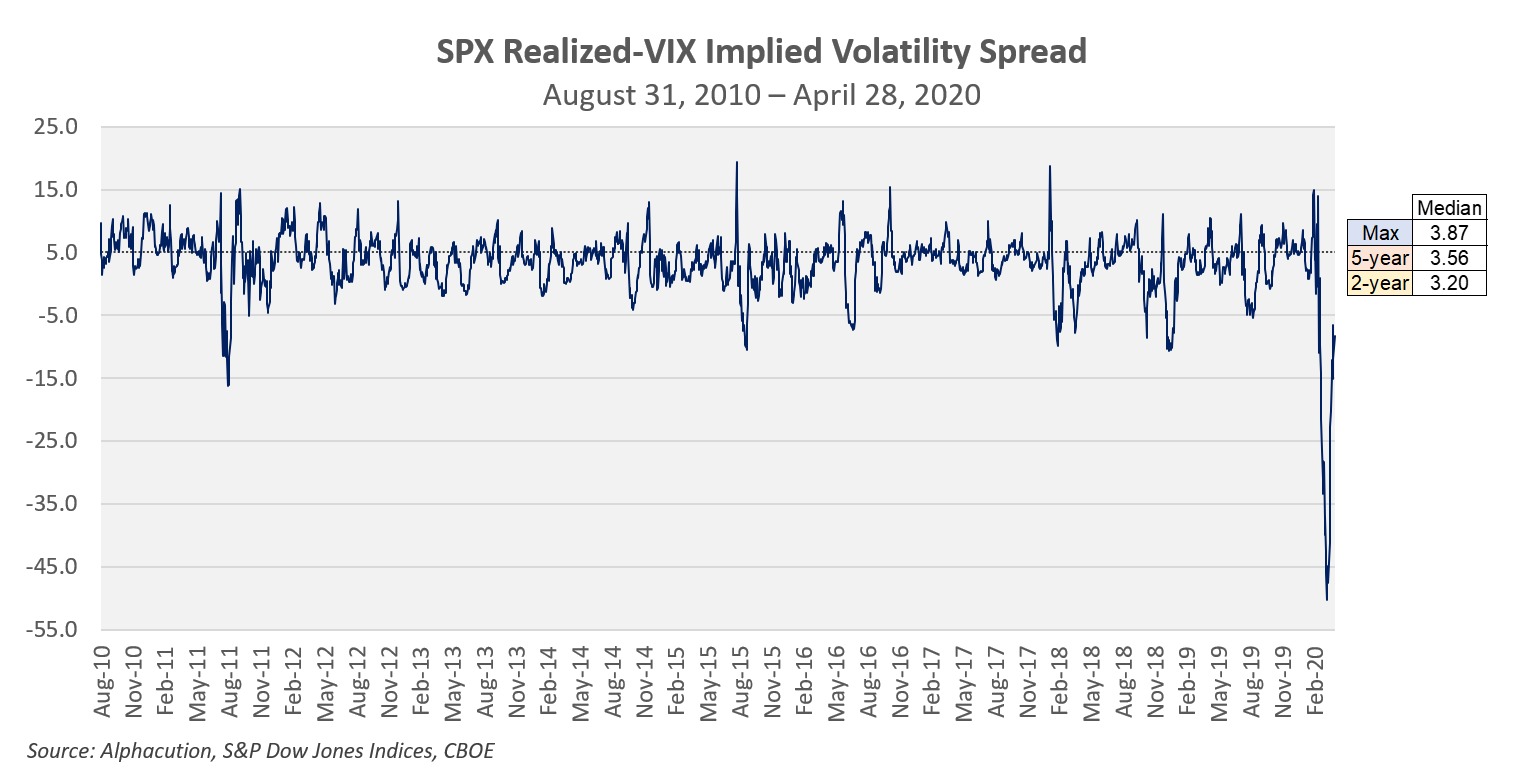 The charts below, courtesy of our friends at Equity Risk Control Group (ERC) – an advisory platform focused on the rental benefits of gamma – show the spread of SPY implied vs 1-month lagged realized volatility (with declining median spreads at 10y = 1.68, 5y = 1.53, and 2y = 1.05), which may help illustrate a more tradeable version of the structural trend detailed in the chart above… 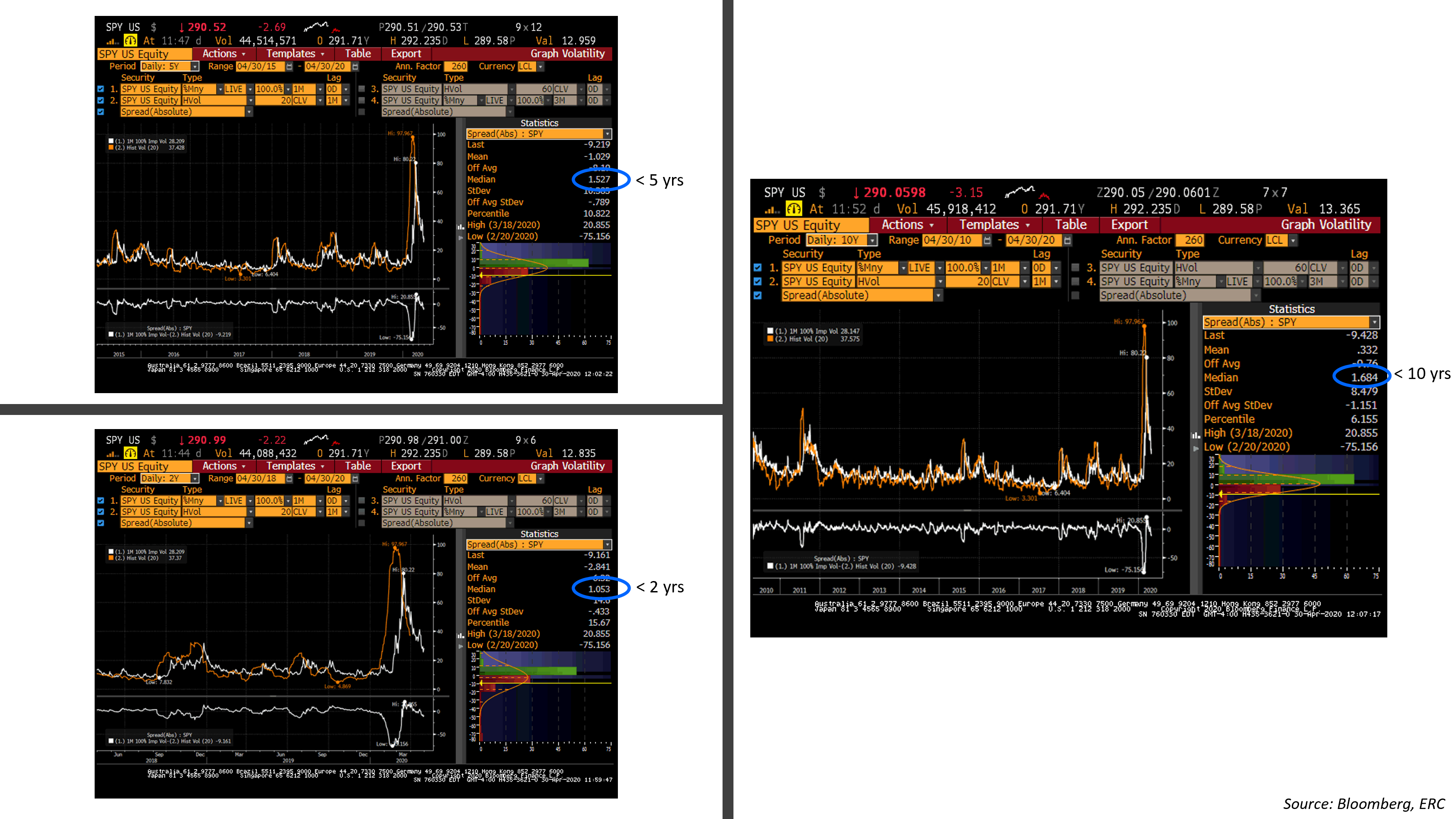 Bottom line: For those of you with traditional strategies and linear performance profiles that tend to struggle in this kind of environment, technology, curve and now convexity would be our recommendation to combat a diagnosis that, frankly, was relevant well before the current disruptions made it obvious…

Until next time, stay safe out there…