He pressed “record” on the cassette machine, leaned back and took a long, deep drag from a cigarette. “Let’s begin,” he said with a heavy accent. In a risky break from protocol, and much to the frustration of my partner – Quantlab co-founder and chief scientist, Ed Bosarge – I asked if I could bum one of his smokes. “But, of course,” the Frenchman said with a smirk…

Scene: Swanky leather-drenched, art-stuffed office, midtown Manhattan, 1998. Arpad “Arki” Busson, then already at 35 a legendary rainmaker for legendary hedge fund managers, like Tudor Investment’s Paul Tudor Jones, had agreed to meet with two of the top geeks from a quant trading upstart to pitch their new strategy to his EIM Group, a prestigious fund of funds (FoFs) platform of the era.

In a bizarre twist of unacknowledged credentials, it was difficult to pretend to ignore the fact that Arki – who had occasionally sported a legendary reputation as an international playboy – was also married to Australian supermodel Elle Macpherson at the time. I mean, after bumming a smoke (or was it two?), it didn’t seem kosher to bow and chant – à la Wayne and Garth – in sincere homage to the full scope of the man’s skillset.

Anyway, it was a heyday of sorts with us scrambling at the crossroads of the hedge fund and quant trading booms. EIM Group did ultimately become an investor in an early incarnation of Quantlab – along with Joachim Gottschalk, founder of Gottex Fund Management, another well-known fund allocator of the recent era.

Today, in combination with EIM since September 2014, Gottex is now known as LumX Group where Arki currently sits as executive chairman – a set of facts that bring us somewhat serendipitously to the central thrust of this note:

A convergence of factors – primarily including interest rates, volatility and technical innovation – have set the asset management world and the surrounding ecosystem of intermediaries and solution providers on a collision course with a precarious unknown; an unknown that takes the form of whatever occurs at the end of a #racetothebottom on management fees, which – as we have been saying for a while – is likely to be an increasingly concentrated incumbency of incumbents.

At minimum, Alphacution believes that the outcome is not likely to be as hospitable to the spectrum of incumbencies that currently exist because the mechanisms for capturing both beta and alpha have shifted so dramatically, particularly over the past decade.

Here’s the setup and some supporting details: The era of persistent, historically low interest rates and volatility – coupled with the proliferation of quantitative and technical methods for improved pattern recognition, computational speed and workflow automation – have set a series of dominoes in motion that have severely impacted all asset managers’ investment performance, asset allocations, product allocations (especially, towards ETFs), and management fees, among other impacts inside and outside the financial arena. To use the vernacular of the day: #disruption everywhere.

Symbolic of the breadth of these impacts is the unprecedented trend, as of late 2017 according to Bloomberg and Hedge Fund Research, that hedge fund closures have outpaced launches for the third year in a row, with a few notable players deciding to head for the beach. Clearly, whether we will ever be able to turn the clocks back from a dystopian paradox of all-time highs and all-time douchebaggery to a hedge fund heyday like the one referenced at the outset is a question that is impersonating the train that has long left that station.

In other words, beta capture is increasingly passive and dirt cheap via ETFs and other indexing products. Furthermore, more – or, most? – alpha capture is now automated and concentrated in very few hands, given the #winnertakeall characteristics of technical leverage; a provocative claim that we will tackle in the upcoming post, Alpha is Finite.)

Meanwhile, disintermediation and disruption of anyone resembling a “middleman” or a gatekeeper of assets, such as FoF operators and even banks(!), is navigating the terrain with a massive target on their backs – exactly as if they were a retailer of anything that simultaneously exists in Amazon’s virtual store. (See Alphacution post, Amazon, Google and the Threat of the Digital Frontier – April 2018  for more on this.

True to this last claim about disintermediation, LumX (including the appended track record of Gottex) has seen their effective management fee rate plummet from 96 bps (0.96%) for 2009 to 14 bps (0.14%) for 2017 – a decline of 86% in the 8 years since the global financial crisis (GFC) and beginning of the firm’s public disclosures. 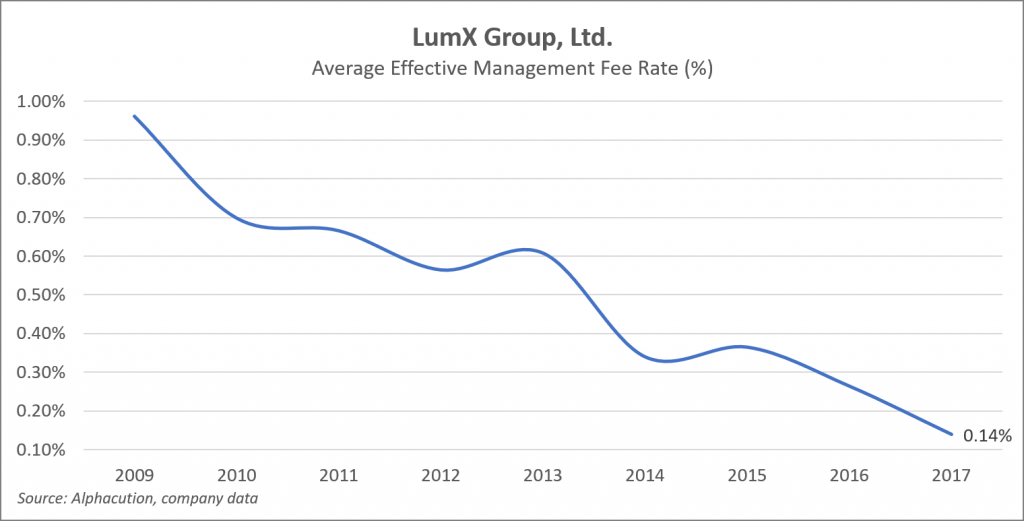 Not to worry. Apparently, you don’t need to be an international playboy to keep enjoying the “LumX life” while earning 14 bps on $7+ billion in AUM like M. Busson et Associés. There are plenty of managers and asset gatekeepers who share this trajectory, as you will see below.

Yet, LumX may be among the more important versions of the nearly universal shape of the fee-compression chart given the following logic: We live in an era that I have often called the incumbency of incumbents. Meaning: In the institutional realm, it is harder for upstarts to break through. Technology is very sticky. Rosters of counterparties – buyers and sellers of solutions – are consolidated and protected in the name of risk management, and tend to become stores of inertia. Fame, fortune and networks are valuable impediments to failure. Today, clients will continue to purchase your wares – even when some of them turn to bullshit – and take forever to switch because kicking the can is de rigueur.

So, if one of the poster boys for the exclusive club of legendary hedge fund incumbents, with all his advantages and special skills, is finding it extra challenging to navigate the landscape – even while slashing his management fee 86% over the course of 8 years  – you might conclude that we are not living anywhere resembling Kansas anymore no matter how much wishing, pretending or slipper-clicking we do…

In fact, as we sit here reminiscing about the 10-year anniversary of the demise of Lehman Brothers – and sharing stories about other hedge fund titans who seem to have lost their way since then (e.g. – David Einhorn, Greenlight Capital; John Paulson, Paulson & Co; or Alan Howard, Brevan Howard Asset Management) – the roster of legendary exits continues to grow.

Let’s return to our convergence of primary factors and the change in the harvesting of beta (and alpha):

FIRST, why buy beta for 75-100 bps through a traditional mutual fund vehicle when you can essentially buy that same beta in the form that behaves like a stock (with little or no commissions, as well) for 10-20 bps? You wouldn’t, which is a big part of the reason why the ETF boom has had such a dramatic (and subtly negative) effect on the “traditional” asset management arena. See Alphacution’s post, Exposing Franklin Templeton’s Greatest Challenge (August 2018) for more on this.

Now, feast your eyes on the industry-leading ETF issuer BlackRock’s assets under management (AUM) growth chart from 2005 through 2017; a face-melting 12-year CAGR of 24.5%, which, to be honest, was turbo-charged by the acquisition of Barclay’s already substantial ETF business during the GFC circa 2009. 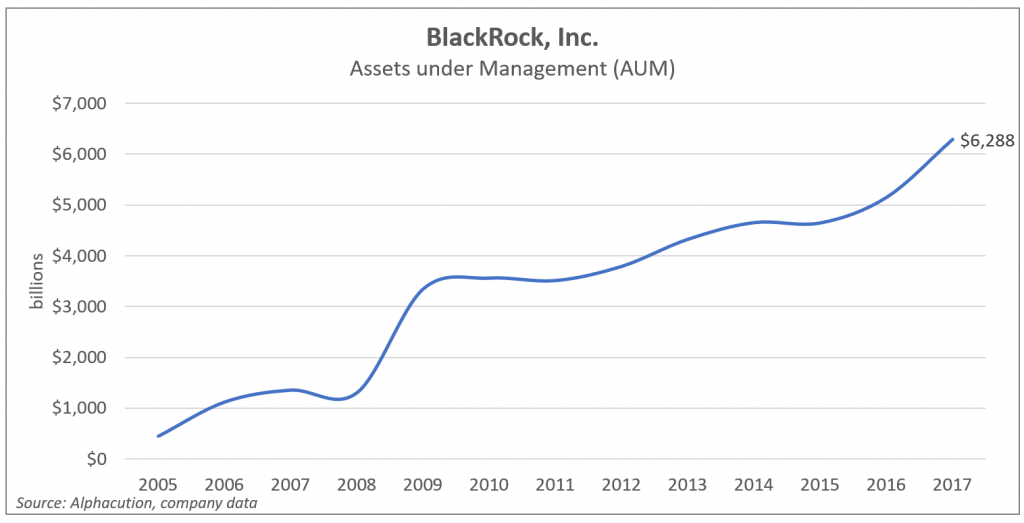 Now, when we consider the AUM growth chart (above) in conjunction with the BlackRock management fee by asset class chart (below), you can get a sense for a primary source of that loud sucking sound we here from all corners of the asset management world. With bargain-basement costs, and no expectations from investors to deliver a shred of performance that is different than “the market” or “the index,” it has become increasing difficult for any asset-gathering manager without a strong ETF franchise to compete. 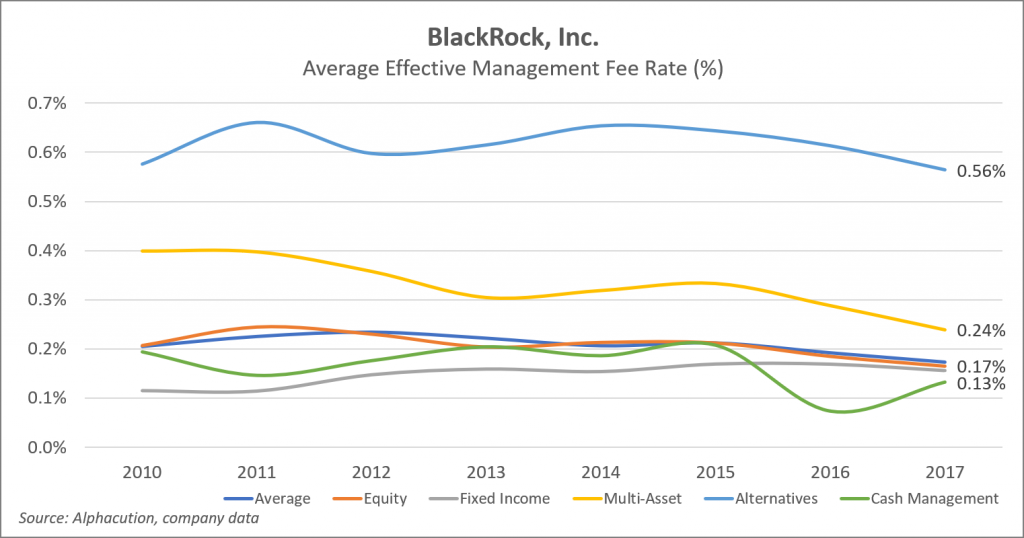 Lipper Analytical Services, a unit of Thomson Reuters (or is it Refinitiv now?), corroborates the prevailing fee trajectory and the variance between the active fees (>30 bps) and the passive fees (10-20bps) in the chart below.

Meanwhile, there are still headwinds: As Bloomberg reported in May 2017, there are now more indexes than stocks. And, that problem is being compounded as the stock market appears to be shrinking, according to recent reporting by the New York Times.

Translation: Low rates, low vol (and shrinking stock inventory) diminish performance potential for all strategies, except perhaps long-term, buy-and-hold. When performance potential is persistently low, investors look to minimize fees and costs much more than in frothier times. These drivers represent tailwinds for ETFs (and ETF issuers) and headwinds for just about everyone else; traditional fundamental investment strategies executed by asset managers and hedge funds, in particular.

The following charts are additional examples that illustrate the breadth of this fee compression: 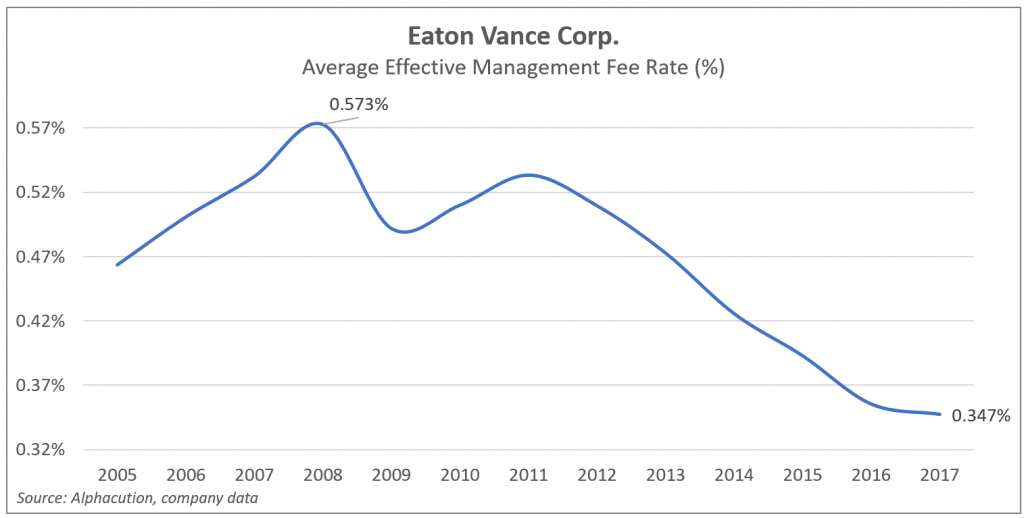 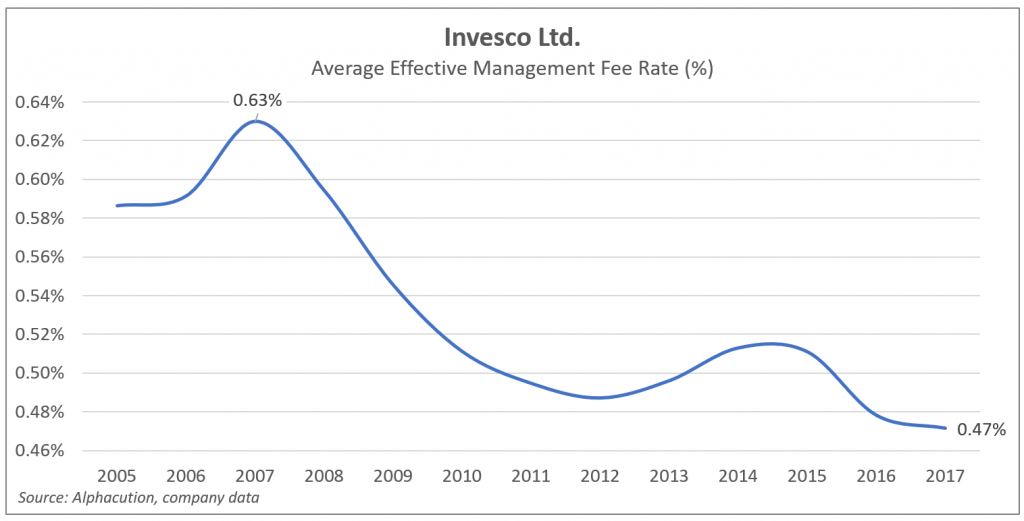 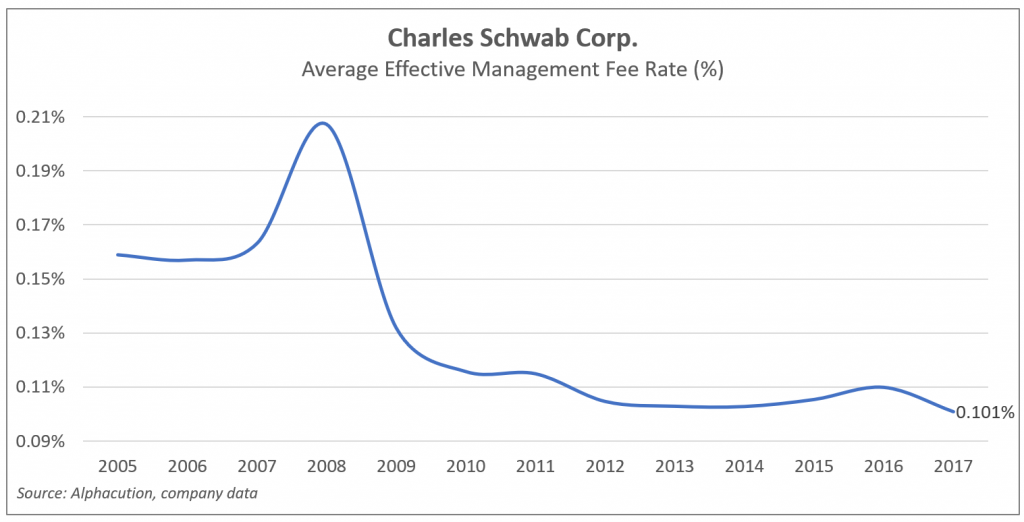 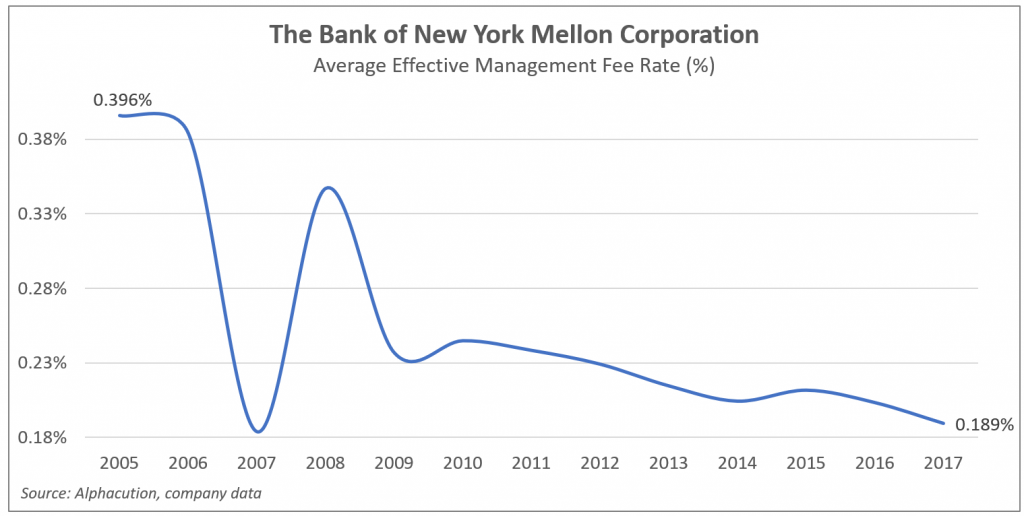 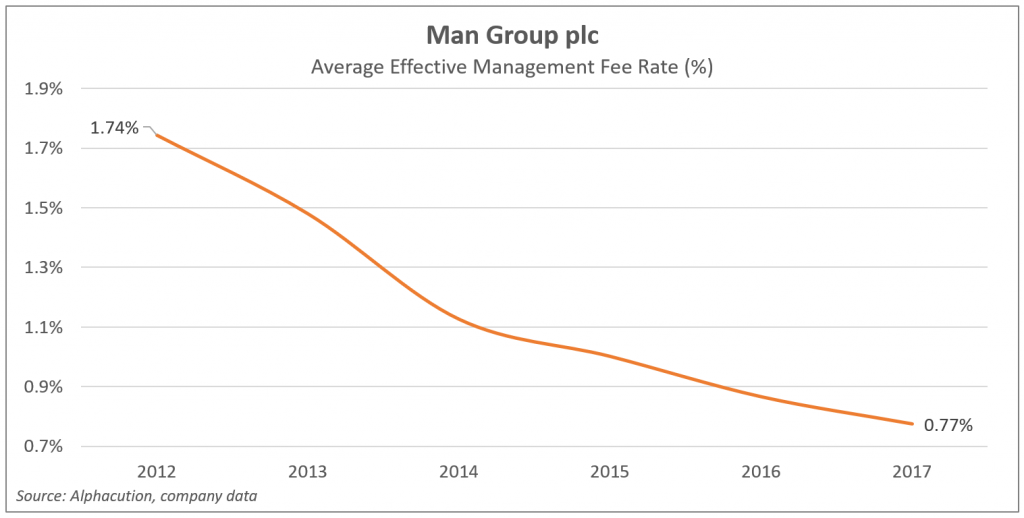 These visuals bring us home to a few closing thoughts:

Alphacution is in the process of validating a hypothesis that quantitative, systematic and other strategy automation methods via technical leverage cause increased concentration of market participants; a phenomenon we have been calling #winnertakeall characteristics. Given the increasing adoption of automated methods in both active and passive strategy groups, technology is playing an increasing role for capturing both beta and alpha.

Lastly, Alphacution has been toying with the concept that alpha is finite, and the implications of that for the ecosystem. If true, along with the idea that automation causes increased concentration of market participants, then a dramatic reshaping of the asset management and hedge fund arenas could be in store. We wrestle with this topic next…