What happens when a company is smart enough, productive enough and wealthy enough to succeed in any business? One thing’s for sure: the roster of incumbents and would-be competitors threatened by that kind of company becomes an extremely long list. This is a threat like none other before because never before has a type of company been able to be so disruptive in so many places simultaneously…

In unprecedented fashion, the digital era has given rise to a few companies whose dominance symbolize such traits. This story is not particularly new, nor are the names of these digital darlings cause for surprise. Management consulting powerhouses, like McKinsey and Accenture, have been detailing the possible threats of Amazon or Google or Apple on the banking industry for the past three years, particularly since the launch of Apple Pay. All the major media outlets, like Bloomberg, and industry specialist reports, like American Banker, have been watching this story unfold as if they were slowly eating from an endless tub of buttery popcorn. After all, each of these stars have proven that they can enter a diversified array of businesses and become successful; occasionally dominant.

We are not going to rehash the analysis-to-date here. However, we have noticed that all of the analysis lacks even a simple quantitative assessment of the probability of such threats, and from whom. So, here’s our two cents for the record:

As has been written on this Feed many times before, like here and here and here – a significant key to harnessing truly disruptive advantages is processing. Now, this concept doesn’t only apply to achieving efficiencies in “back-office” type processing, which is much more commoditized, and therefore, more heavily dependent on the dividends of automation via technology.

More importantly, disruptive advantages apply to the processing of intelligence and ideas – as if to cultivate a series of trading signals or investment decisions. This “front-office” style processing – how companies discover and cultivate opportunities – is largely idiosyncratic, relies heavily on knowledge management, and is often the direct result of hard-to-quantify intangibles, like culture in addition to concepts that we care deeply about here at Alphacution, like “return on technology.”

In the exhibit below, we present simple weighted-average “indices” of revenue per employee (RPE) calculated for two large, incumbent banks – JPMorgan Chase (JPMC) and Bank of America Merrill Lynch (BAML) – and three of the most dominant digital players – Amazon, Google and Apple; the former is labeled as the “analog frontier” proxy, the latter as the “digital frontier” proxy. The gap between these two indices is an indicator of the difference in productivity per employee for each sample. 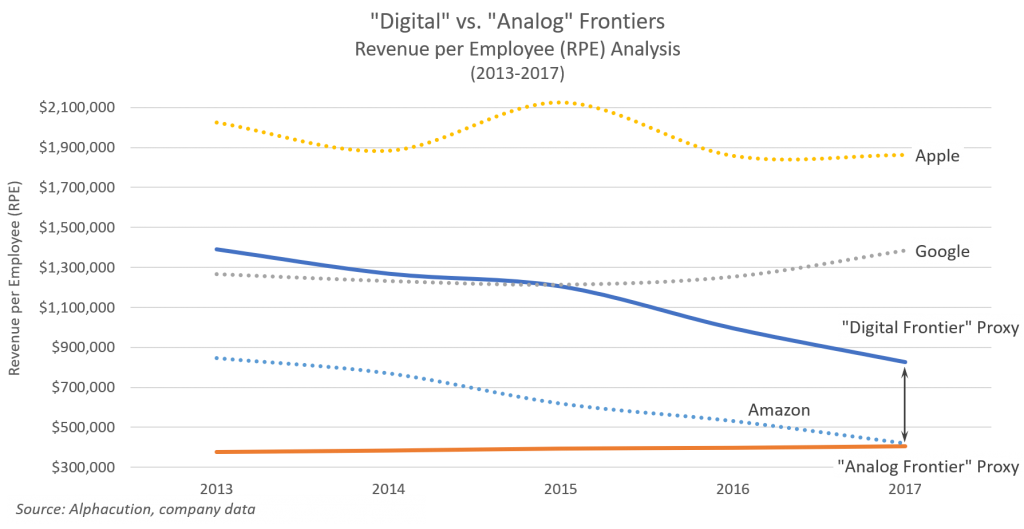 First, there is no disparagement intended in the use the term “analog.” We could have just as easily made these points using the terms “build new” and “renovate.” It is much more challenging to renovate than build anew. So, being born onto a blank canvas in the digital era – given the mass and unprecedented levels of innovation that have come available over the past few decades – is a distinct and likely immutable advantage.

Second, the main takeaway here is if digital leaders can migrate a workflow from being less efficient to being more efficient by reconfiguring the mix of people, process and technology, then they stand a chance of being truly disruptive in an industry, like financial services – which is already undergoing significant transformation. Of course, this axiom is a bit of an over-simplification because there other important factors at play, such as brand equity (trust), switching costs / customer “stickiness,” and regulations.

The illustration above essentially shows that the digital frontier is roughly 2 – 4x more productive per employee than the incumbents (and these are a couple of the strongest incumbents in the world). And, that digital frontier is only declining because of the scale (in headcount) of Amazon – particularly, given its recent acquisition of Whole Foods – relative to Google and Apple.

While Amazon has entered into partnerships with Wells Fargo (student loans) and Bank of America (small business loans), neither of these ventures have yielded the fruit that one would normally expect from Amazon. It actually feels more like they are “picking the brains” of these incumbent banks before they consider whether to go whole hog into segments of the banking business.

That said – and despite their obvious technical prowess – Amazon is far more dependent on human capital than Google or Apple, and therefore, may not be able to move the needle all that much relative to banking incumbents when it comes to productivity. With a much higher RPE – that is INCREASING with scale – Google (or, Alphabet) would be the player to watch when it comes to the greatest digital threats on parts of the banking and financial services spectrum.

Lastly, the outcome of this phenomenon – the battle between the digital and analog frontiers – may just be a matter of time. The question remains: Can a company born deep into the analog era ever reinvent and reengineer itself enough to perform at or near the level of a digital leader? In our journey of modeling and studying these animals in the wild, I remain skeptical. The bad news is that these gaps in productivity that signal the likelihood of disruption may never be minimized enough to serve as an effective defense. The good news, however, is that there is only one Google or Apple or Amazon – and the way the playing field is set up today, I’m also skeptical that additional members will ever be let into this club…