As we seemingly make a sharp turn from the classically-drunken “I love you, man” phase of the cycle and barrel headlong towards #peakinsanity – as if the wheels are still attached to the clown car blasting along a winding road upon which a noted hedge fund trophy hunter has just stitched a small $99 million coda onto his existing Griff-a-Lago compound (a quarter mile stretch of Florida’s “Billionaire’s Row” beachfront) as the latest addition to the rest of his discrete, not-compensating-for-anything display of uber-luxury real estate holdings; while some $17 trillion of European sovereign bonds have been issued with negative rates; and, the White House is 6 tweets away from causing the printing press for the global reserve currency to be moved from Mr. Powell’s office into the Oval – we now have this: Hong Kong Exchange (HKex) is making an unsolicited $36.6 billion bid for LSE.

Sure…  Why not? What could go wrong?!

Yes, the exchange business faces significant headwinds (because everything that once required an intermediary must now be provided for the always-best price of free) while everything data, data solutions and data infrastructure is exciting, marinated in creativity and has strong net profitability tailwinds for growth into the foreseeable future. That all makes sense.

And, yes, the trading and asset management supply chain is lengthening to include more outsourced (market) data infrastructure among other components of the workflows. That’s good for a reactively-expanding list of solution providers, like the incumbent Refinitiv but also like the ex-TR-exec led and well-backed startup of the federated data access layer solution provider, Crux Informatics, among many other data solution innovators.

But, since when does anything really need to make sense as long as players like Blackstone can broker the three-card Monte-styled entry and exit of a chunky, throat-choking trade like this in just 10 months – and you gotta know that the pins were being lined up well before that – with a charm offensive that makes it seem like this deal is cause for widespread celebration? Queue the marching band!

The market landscape sucks (for most institutional traders and asset managers).

A broadly defined version of the asset management industry is in full-blown consolidation mode with a few dominant leaders causing a barbelling of the strategy spectrum between active and passive. (Refer to any number of Feed posts on our asset management ecosystem map if you don’t get the joke.)

And, everyone else is getting squeezed in the middle with the possible exception of a few well-established, technically-savvy relative-value players. This is the main driver behind the fury over outsourcing, supply-chain re-engineering, and the fireworks around new data solutions…

Meanwhile, unless the Volcker Rule is entirely rolled back (and even then it may not matter for most given the decade of brain-drain and technological slippage since the GFC), noted sell-side firms are downsizing, if not floating the idea of eliminating outright, their global equities operations (as we recently noted here and here). These are somebody’s – nearly everybody’s – clients! The very same ones that were largely responsible for so generously subsidizing the bacchanal in the first place. Oh, the irony…

Furthermore, taking the HKex party crashing move out of the mix for a minute (which as of this update has since been declined by LSE), from a marketing perspective the optics of the LSE-Refinitiv combo certainly don’t glide over the tongue all that easily because it is exactly these types of dramatic transactions that cause customers to contemplate absorbing what they perceive to be monumental switching costs for complex solution infrastructure when under more normal circumstances. And, that twist of perspective is driven by the common belief that these types of dramatic transactions cause solution providers to take their eyes off the ball. Much of the blood, sweat and tears that have apparently been avoided by Blackstone, given such a quick round-turn of the trade, are now more likely to be borne instead by customers in the form of intangible costs…

Maybe the uptake works better if Refinitiv is the surviving brand and LSE’s exchange operations are integrated with the likes of FXAll. (No politics there, for sure.) Similar to those asset management firms and solution providers who have attempted to rebrand themselves as technology firms, it shouldn’t take the stretchy flexibility of a yoga instructor to assume the pose that exchanges could legitimately rebrand themselves as data providers. (Certainly, they argue – and there’s solid evidence and precedent to support it – that datafeeds and data solutions have been where all the growth in action has been lately.)

And yet, adding HKex back into the mix (hypothetically speaking, for grins and giggles), it then seems like we might as well be playing Scrabble. But, then again, who really cares about branding and effective messaging when the switching costs of complex market data infrastructure in the current resource- and headspace-challenged environment are still so high. The calculation being made by the triumvirate behind this deal, therefore, must be some version of: Who, if any, has the stones to call their bluff?

Didn’t you get the memo? This is an incumbency of incumbents, dammit, and Blackstone is here to rub your face in the impunity of it all.  I think I’ll change my name to Sequoia where you’ll find me atop CB Insight’s hectocorn list next week…

And, BTW, are we now going to imagine CME Group acquiring a chunk of Bloomberg? Or, Nasdaq buying Factset? Doesn’t seem likely, but who knows anymore…

Now, if you can’t tell already, this is one of those “sorry, not sorry” critiques, lightly dusted with a slightly spicy ambrosia of cynicism. If you think that I’m referring to Thomson Reuters (TR) or Refinitiv in this headline, then that’s on you. Though most of my friends from the old TR have moved on to some cool gigs, some still remain to develop and manage world-class solutions for some truly complex data and workflow challenges. Furthermore, if you’re LSE, then you’re definitely looking to change the channel with a compelling, if not provocative, narrative – and this move (subject now to whatever happens with HKex) certainly grabs one’s attention by the collar. The question that remains, then, is: Can they pull it off? Or, is this move over the top?

As for the clever folks at Blackstone, I hope readers can sufficiently appreciate the act of throwing a few sharp and respectfully-sporty elbows at what Tom Wolfe once dubbed the “Masters of the Universe.” They’ve been well-compensated for the – uh – effort (and whatever critiques may come their way, sporty or otherwise), and therefore, those who harbor sympathies for a crew that so deftly navigates this landscape – now with several extra zeros in their wallets – might consider checking the settings on their compass…

Plus, at the end of the day, I was simply looking for my own attention-grabbing excuse to use turd in a headline, because – wait for it… –

…it truly is a shit show out there… 😉

Lastly, the following charts represent where we were in our modeling before Blackstone took TR’s Financial and Risk division private – as well as showcased in the post, “Quant Invasion Continues as Data Infrastructure Overtakes Eyeballs.” Chances are, today, infrastructure and feeds have continued to diverge positively from screen revenue, cost structures have been right-sized mainly with reduced headcount (along with a ton of institutional memory taking the elevators – their allotted box of tchotskies in hand – to the lobby), but revenue may – umm, is likely – still be challenged. 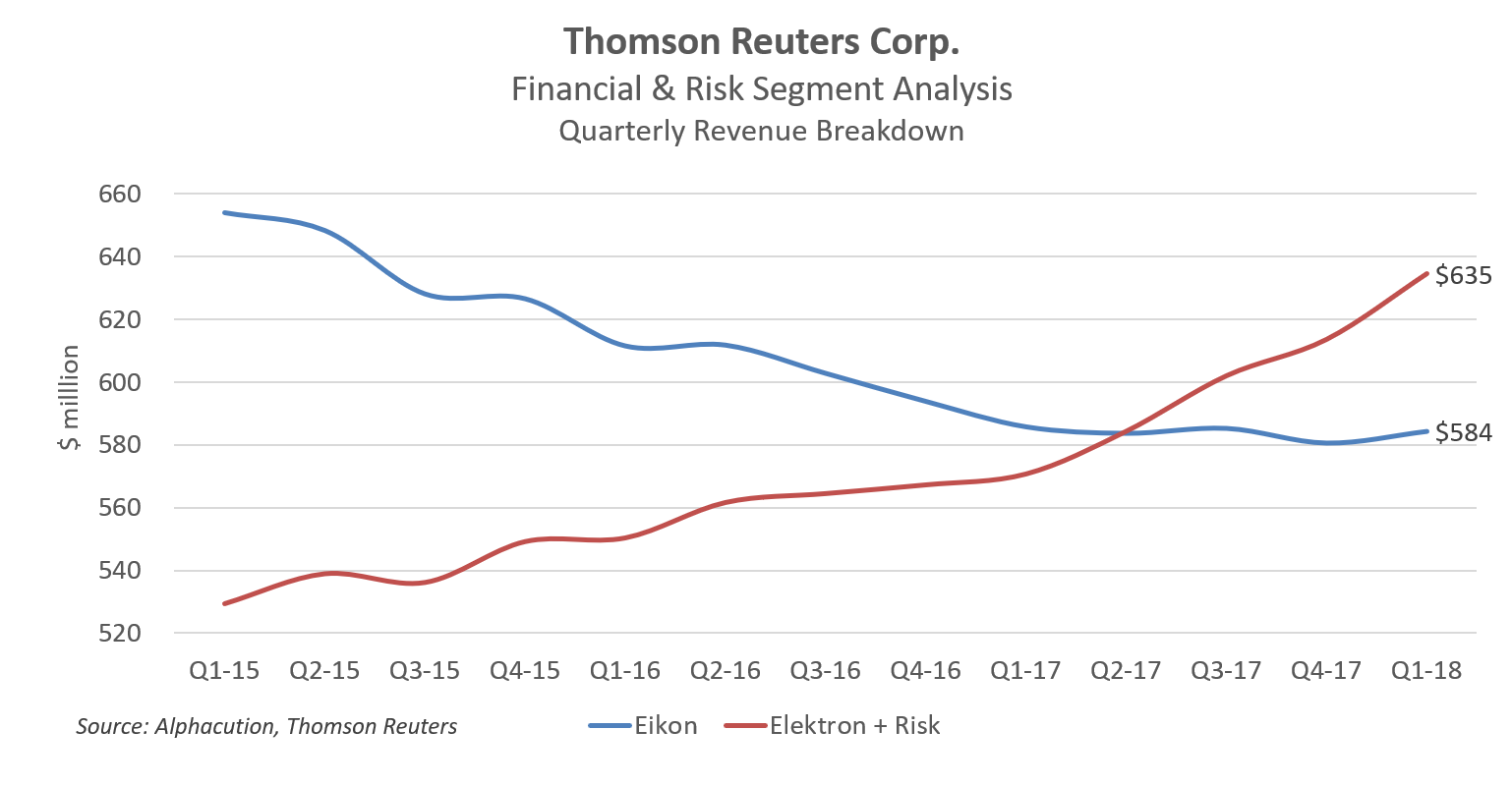 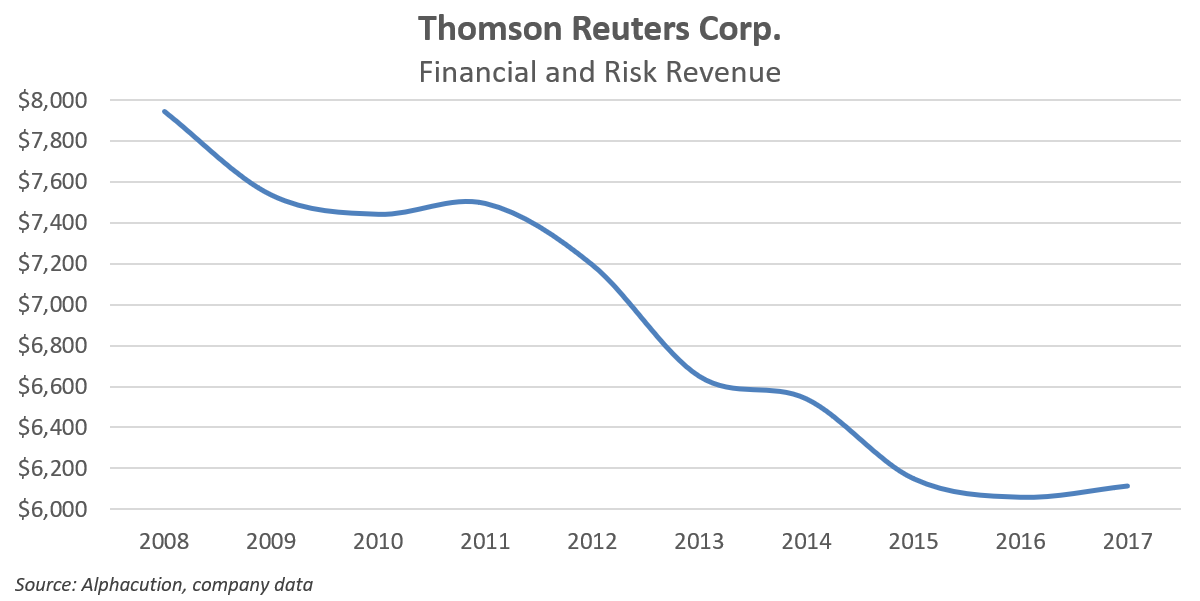