Like the financial markets equivalent of “dude”, or “bro” or the many satisfying derivations of “F**K,” the term “alpha” seems to pepper our market discourse in a way that has few peers. Rightly or wrongly, there isn’t an investment or trading context into which it is not shoehorned. We hear it everywhere, at all times, and in numerous forms:

Portable alpha… (A strategy that had its heyday around 2006 and has recently tried to make a comeback.)

And, my personal favorite (for its level of misguidedness), generating alpha…

There are conferences named after it, like the CNBC and Institutional Investor ANNUAL Delivering Alpha

Conference, now apparently in its 8th year. And, of course, some of the most brilliant and creative companies of all time have been named after it! – and, I’m not necessarily talking about firms like Visible Alpha or AlphaSense or the defunct quant strategy development platform, Alphacet…

To be fair, the list of common usages might include the crowd-sourced financial markets content service, Seeking Alpha – which is one of the few that gets it right, at least in name, as you will see below.

Anyway, at the risk of being dismissed outright for splitting hairs, there is a significant point to be made here: In many cases, word choices are too important to be cavalier – and, in this case, a little extra precision can make a critical difference. This is because the most common usages of the term alpha tend to be misguided, at best; outright wrong, at worst. And so, those who employ them inadvertently display their ignorance about the true meaning and nature of alpha. (Vendors are often guilty of this.)

So, other than assist some folks with a common blind spot, the primary reason behind this preparatory step is that Alphacution is cultivating a bold hypothesis about the capacity of alpha and whether it can be quantified, where capacity means the estimated maximum amount of capital that can be deployed and still earn the expected returns of a strategy. (Note that highly-automated, high-turnover trading strategies tend to care a lot about capacity – so the “quants” tend to be the most up-to-speed here. However, for longer-term, less-automated, fundamentally-oriented, buy-and-hold strategies, capacity may never come up because it’s rarely perceived to be a concern.)

In order to build the strongest argument for such a hypothesis, we must first get everyone on the same page by shifting some language and adopting some new perspective. This effort should lead to a deeper understanding of the persistent interdependencies of market factors (like, interest rates, liquidity and volatility) and interconnectedness of market actors (like market-makers, hedge funds or technology solution providers, among many others).

Now, if you are still following along and haven’t already figured it out, the translation of our title – α < ∞ ? – is intended to be the mathematical notation equivalent of the question of whether or not the capacity of alpha is finite, denoted as less than infinity.

At the base of it, what we are typically trying to convey when using the term alpha is a state of excess return or outperformance relative to the return of a benchmark index. From there, more detailed definitions quickly risk a slippery slope into complexity. It’s one of those situations where the more you say, the more likely you are to say something stupid. Good news is that we should be able to stick with the basic definition from here on out.

Meaning, we should easily come to universal agreement that alpha is NOT infinite: First, the notion of outperformance suggests that there is a mean benchmarked return. Like a normal distribution (or, bell curve), alpha is a “tail,” and a tail cannot be infinite. Second, there is no single market with infinite liquidity. Moreover, the sum of all markets’ liquidities is still not infinite. So, since the maximum of excess returns are dependent on liquidity – and, there is no single market with infinite liquidity – alpha cannot be infinite.

∴ Alpha must be finite.

Now let’s return one last time to my pet peeve: There is no such thing as generating alpha or achieving alpha or delivering alpha! Each of these versions imply that alpha can be manufactured at will and perhaps even to any extent possible – including infinity – that the “generator” of alpha desires. It simply doesn’t work that way.

Instead, think of it as if all “alpha” already existed out in the wild. As such, alpha must first be discovered and then captured – and, specifically in that order. For instance, capture without discovery would simply be accidental alpha – and, my suspicion is that much of what some asset managers, marketers, and the financial media celebrate as alpha, is actually accidental alpha – or, temporary alpha – which is one reason why several former hedge fund titans have recently closed up shop.

What we are really looking for is persistent alpha. Persistent discovery, persistent capture.

Lastly, to be clear, Alphacution is introducing the provocative concept of measuring the total global capacity of alpha at a given point in time. In layman’s terms, the total global capacity of alpha will be large – and it will certainly increase and decrease based on impacts of key market factors from period to period –  but it will never be infinite.

This is a hypothesis that, once validated, could offer new and significant predictive powers to the current arsenal of available navigational intelligence tools for asset managers, investors, intermediaries, solution providers – all stakeholders in the ecosystem. In the meantime, the idea brings up more important questions. Consider the following related concept that we have been wrestling with: This is the idea that in the digital age, the application of technology – or, technical leverage – causes some markets to take on “winner-take-all” characteristics. Think, most notably, Amazon, Google or Facebook, where these players tend to dominate markets that they enter. This is something Alphacution has called the threat of the digital frontier.

Could the same #winnertakeall scenario occur in financial markets? Could the technology-driven players – mainly, the quant hedge fund managers – be capturing an increasing share of finite alpha? If a system could be tuned to identify a persistent source of alpha – typically a temporal or information arbitrage – and then go and capture that alpha wherever it exists, could that source of alpha be harvested in total by a single market participant (or, concentrated group of market participants)? And, if so, what are the implications of that phenomenon for the shifting composition of the asset management world?

The anecdotal evidence – if not, the solid proof – may not be hard to find. According to Institutional Investor’s 17th-annual Hedge Fund 100 ranking of the 100 largest hedge fund firms in the world as of year-end 2017 (published August 2018):

“A handful of quantitative firms have continued to gobble up large sums of assets, catapulting many of them to the top of [the rankings]. The four biggest hedge fund firms — and five of the six biggest — on this year’s ranking rely largely or fully on computers to make their investment decisions and have continued to attract assets in spite of underwhelming performance in some cases. At the same time, many well-established, recognizable firms with long track records have once again suffered a sharp reduction in assets or are shutting down altogether.”

Those five firms include:

Next up: A conceptual framework for how factors – including market structure evolution – influence changes in alpha capacity… 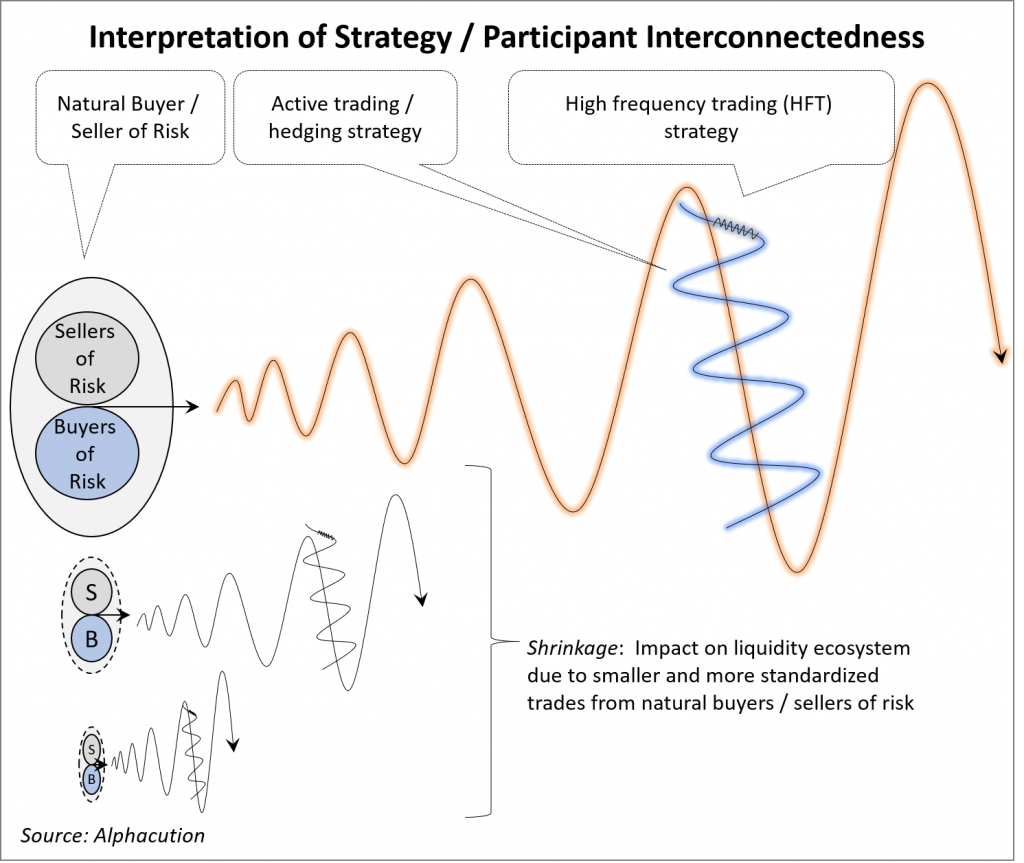 …and also, The Privatization of Alpha.