Jensen Huang, CEO, Nvidia: “Software is eating the world, but AI is going to eat software…”

One of the most fascinating aspects of innovation is its resistance to scaling. At least this is one observer’s interpretation. Those trying to innovate at increasing scale – like, inside a large enterprise – might prefer to describe it as frustrating, to say the least.

The rabid interest in startups – small groups of visionaries and entrepreneurs that are able to deliver radical levels of change to the provision of solutions for unmet market needs – is a reaction to this resistance. During the post-global financial crisis (GFC) hangover, it became vogue for large banks to establish externalized “innovation laboratories” to protect relevant and critical innovations from the harsh bureaucracies and incumbent politics inherent to large enterprises. Best case, they keep the proximity of innovation close; worst case, the messaging serves as a marketing tool.

Of course, #fintech innovation has been a raging hotbed of innovation for the past few years, and many expect – as we do – that this level of attention, disruption and disintermediation is likely to continue for a generation. A big part of the potential for this transformative power is due to the fact that modern financial markets are still a relatively young business; only recently emerging from decades of largely proprietary development.

My analysis and experience pegs the beginning of the first modern markets super-cycle to the mid-1970’s to early 1980’s with the conception of option pricing theory (including the swaps market), design and development of streaming market data feeds, and the advent of democratized computational leverage. These developments converged to promote a spectrum of new financial products and increasingly automated trade workflows, among other largely lucrative impacts.

Alphacution was established, in large part, to give voice and illustration to these developments, primarily in terms of both technical and process innovation. Moreover, the goal here has been to quantify the conditions under which innovation is adopted and deployed as well as to devise various modeling frameworks to benchmark leaders and laggards in different segments of the ecosystem. For instance, though scaling is challenging, leaders do emerge to overcome such challenges.  What are the conditions for this, and are they transferrable to or adoptable by other players or are they somehow locked within specific cultures? We have explored these questions and discovered methodologies to quantify these phenomena.

So, with this picture as a backdrop, the following concepts should come as no surprise:  For better or worse, the more that people are involved in a process, the lower its performance tends to be, on average. Occasionally, we have called this phenomenon “human latency” and compared the magnitude of addressing that category of opportunity to that of the more common network and computational latency categories of the automated trading world.

A corollary to this is also true:  The more that technology is embedded in a process, the higher the performance tends to be, on average. The ratio revenue per employee (RPE) is an analytic we typically use to define and compare the “performance” of different business models and players in the ecosystem. We also believe that RPE is useful as an inference for the level of automation in those processes – and, the ranges to which specific business models tend to gravitate. The behavior of this factor is what gives rise to the potential for new types of performance and operational risk benchmarking within similar business segments.

These points bring us home to the central thrust of this note: Alphacution has modeled a group of the largest global banks and found there to be a persistent, quantifiable and predictable relationship between technology (i.e. – automation innovation) and performance. The same goes for a broad spectrum of asset managers (including hedge funds, proprietary trading firms and market-makers). Not to be left out, our modeling of the IT services sector also support the intuition that the level of workflow automation and performance is highly correlated. On average, IT services firms exhibit the lowest RPE’s in the ecosystem; a confirmation of the fact that they are engaged almost entirely in “human capital leverage.”

As we have turned to an analysis of some of the largest data processing, content development and software solution providers in the financial ecosystem – a group we have dubbed “BigFinTech” – the aforementioned relationship between technology and performance persists, but takes on additional meaning.

For instance, those who aggregate, deliver, display and manage data via software do not necessarily enjoy the level of performance of those who use that software. To be fair, however, pure-play financial software providers tend to have significantly higher performance – as measured by RPE – than those firms that engage to various degrees in data management, content development and software development.

In other words – if you haven’t figured out by now – the balance of people and technology is the determining factor with RPE. This has to do with the balance of “technical leverage” and “human capital leverage” embedded in the workflow processes of both buyers and sellers of software, data and research solutions. It is the measurement of this “balance” that is germane to all companies in the ecosystem, and therefore, is the factor that moves all actors in a supply chain to the same side of the analysis.

The overarching point is that each type of business – retail banking, market-making, software development, content aggregation and delivery, whatever – has a relatively predictable range of RPE; the specific levels within which are related primarily to process efficiencies which Alphacution believes are further influenced by culture (including cults of personality). Given the persistence of these factor relationships (as illustrated by public data), Alphacution is often able to “reverse-engineer” key operational factors for private companies along with their public siblings.

With all that still as prelude, Alphacution introduces its BigFinTech Index – the weighted-average RPE of a grouping of the largest public fintech companies; a sample that ranged from 29 to 34 companies during the study period (due to IPOs and acquisitions). Alphacution has discovered that, over the total time-series of 12 years ending 2017, the BigFinTech Index yielded limited absolute performance improvement – and has not yet returned to its high of $248,070 achieved for 2006. However, over the 2-year period ending 2017, this Index has made a notable turn with an unprecedented rise of 11.6% off its low of $220,562 and appears poised to continue improving over the coming years, as indicated by a best-fit trendline (see exhibit below). 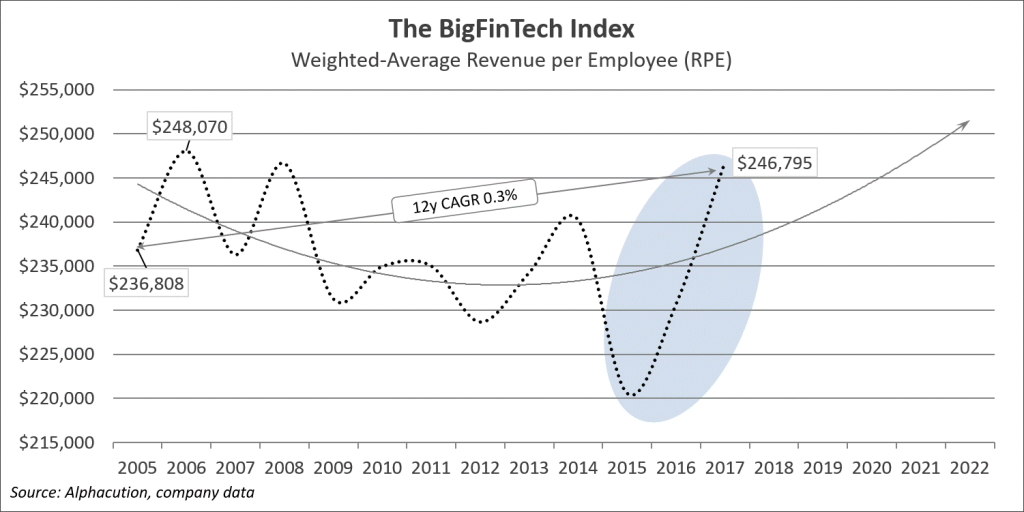 Is this latest turn of improvement due to the adoption of process innovations, like blockchain or AI (as predicted here at the outset by Jensen Huang)? Or, is this an aberration of revenue and headcount temporarily diverging across numerous BigFinTech companies? Or, is it due to something else entirely?

With all the attention paid to the promise of #fintech, we can’t help but wonder if and where it ever “moves the needle.” After all, most markets – whether they be for securities or solutions – have become increasingly concentrated, thereby placing most of the control for the adoption of innovations in the hands of what we have often called an incumbency of incumbents.

The market for new software solutions related to banking, asset management and other financial services businesses is no different. A review of the revenue and headcount rankings of fintech and finserv software providers is highly concentrated. Alphacution’s analysis of 34 public financial software (and data) companies puts 48% of that group’s $84.1 billion in revenue for 2017 among the top 5 players. The same is true for headcount, where 49% of total sample headcount of ~340,600 for 2017 is concentrated among the top 5 players (and, 4 of the same top 5 for the revenue ranking).

So, if we were to dilute the impact of largest players on the weighted-average BigFinTech index by looking at a simple average of RPE’s of those same players – which is a more accurate way of illuminating key factors for discrete enterprises – the picture, trajectory and conclusions implied by the Index change (see exhibit below). Here the smaller and more homogeneous software solution providers influence the overall level of RPE relative to the weighted-average RPE version. 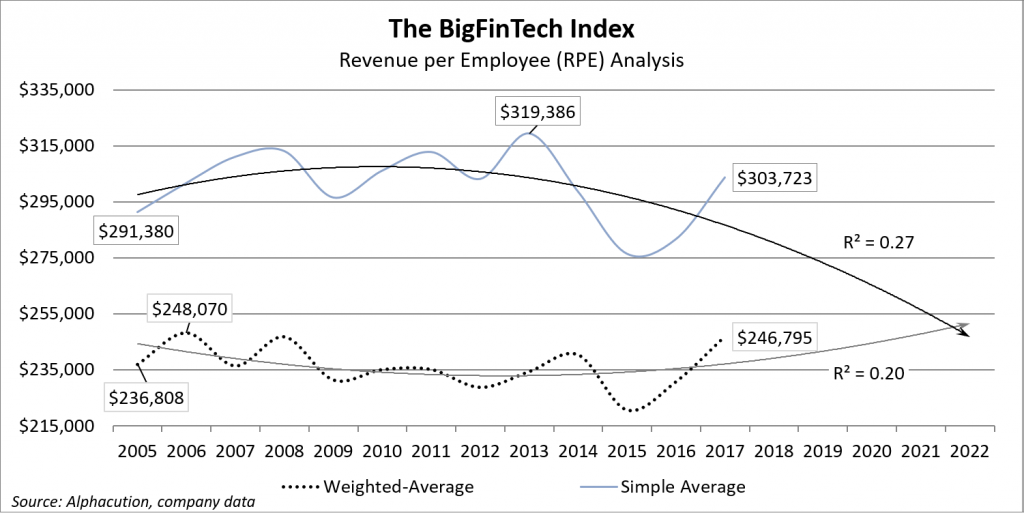 But there’s more along with some final thoughts for further analysis and discussion:

First: The opposing trajectories and the low R-squared figures in the exhibit above suggest that there is no obvious trajectory for the near future of the Index. And, despite a recent surge, the historical data suggests that there has been limited improvement in performance, and therefore, limited impact from innovation over the past 12 years; a period the arguably has never experience as much innovation.

Second: At the limit, there is potential for innovation in all aspects of a business. Each task in every department in every segment of an enterprise can become incrementally more productive – although, in truth, there are also circumstances where the pursuit of hyper-efficiency can also give rise to certain operational risks. (A story for another day.) These days, it is customary to think of this progress mainly as a result of some technical implementation, even though there are other categories by which productivity can be enhanced – perhaps via skills mix shifts or process refinements (that don’t necessarily involve new software solutions).

Conclusion: Maybe AI is not (yet) the cause of short term improvements in RPE growth. It’s acquisitions. Acquisitions are the greatest source of scaling, but don’t yield much improvement in “performance.” Also, there is an inverse relationship between scale and performance, as illustrated in the exhibit below. The upward slope in trendline is limited because, with the exception of the more pure-play software solution providers with notably high RPE’s, the rest of the sample yields a tight range of RPE’s that is influenced primarily by a varied business mix and varied process efficiencies. The latter of these is where we will ultimately get into more detailed benchmarking. Stay tuned… 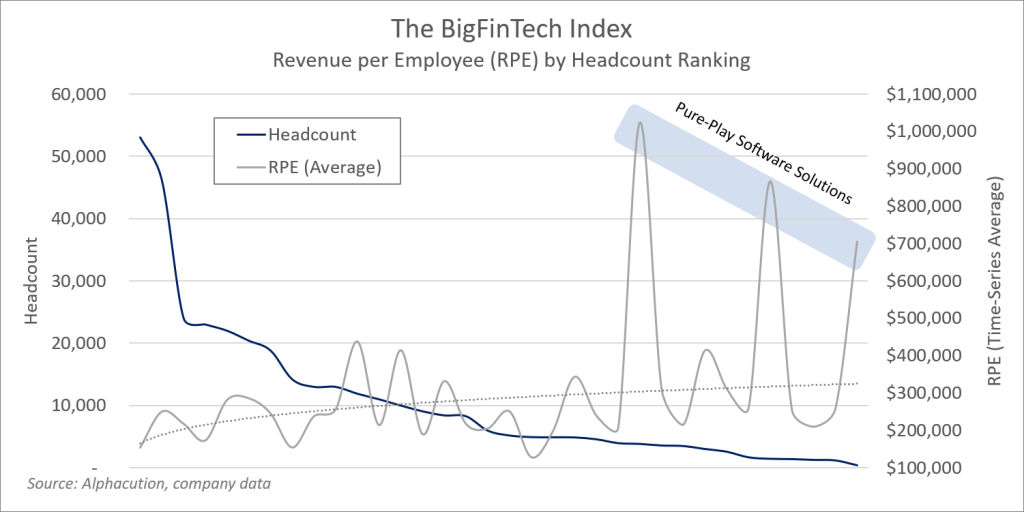 From time to time, we have written about the conditions under which companies “defy their scale” which can be illustrated by the divergence from a benchmark. From the analysis above, and unlike other segments of the ecosystem, there are no obvious examples of a company defying its scale. The is a rather sad comment because a lack of process innovation is a condition for disintermediation – and there is a roster of tech giants born in the digital era that excel at both process innovation and disintermediation.