“Enough is a feast.” – Buddhist Proverb

While many of us are ramping up to gorge ourselves on the annual tryptophan bacchanal, perhaps lubricated by an appetizer of American football where – in the likely case of far fewer of us – we will watch my hometown Detroit Lions perform their annual holiday impersonation of a major league sports franchise, and I will watch my 91-year old father behave as if they haven’t been disappointing him for lo these past 53 years since the birth of Super Bowl I.

Yes, it is the holiday season again and it probably borders on being little crass to talk shop on a coveted day away from whatever salt mine in which you have chosen to toil. But then again, I thought it might prove useful to offer a short bromide to accompany whatever you are feasting on today…

Concentration risk, not of positions but of the increasing dominance of tech-wielding leaders on listed market inventory, is like a locomotive with no apparent mechanism of restraint, save for self-restraint. (LOL!) Show me any industry that is successfully managing the incessant march of technical innovation today, and I will show you an industry that does not yet exist.

Meanwhile, a parallel fascination with increasing the complexity of market structure – one that actually favors these leaders – also seems to march along without restraint. For instance, back in September, Reuters reported that “at least three new U.S. stock exchanges are expected in 2020, potentially lowering trading costs as the upstarts try to take business from the incumbents, while also adding complexity to the marketplace.”

How can lower costs and higher complexity be in the same sentence?

Please allow me to suggest a few critical edits to this statement: [These developments] potentially lower trading costs for some, while larding those costs in the form of intangible costs on all other market stakeholders by adding complexity to the marketplace. Though in need of an update here and there (such as the 14th US equity exchange – MEMX – and closing of at least one bulge dark pool – Citi Cross), the following exhibit is Alphacution’s visualization of that complexity: 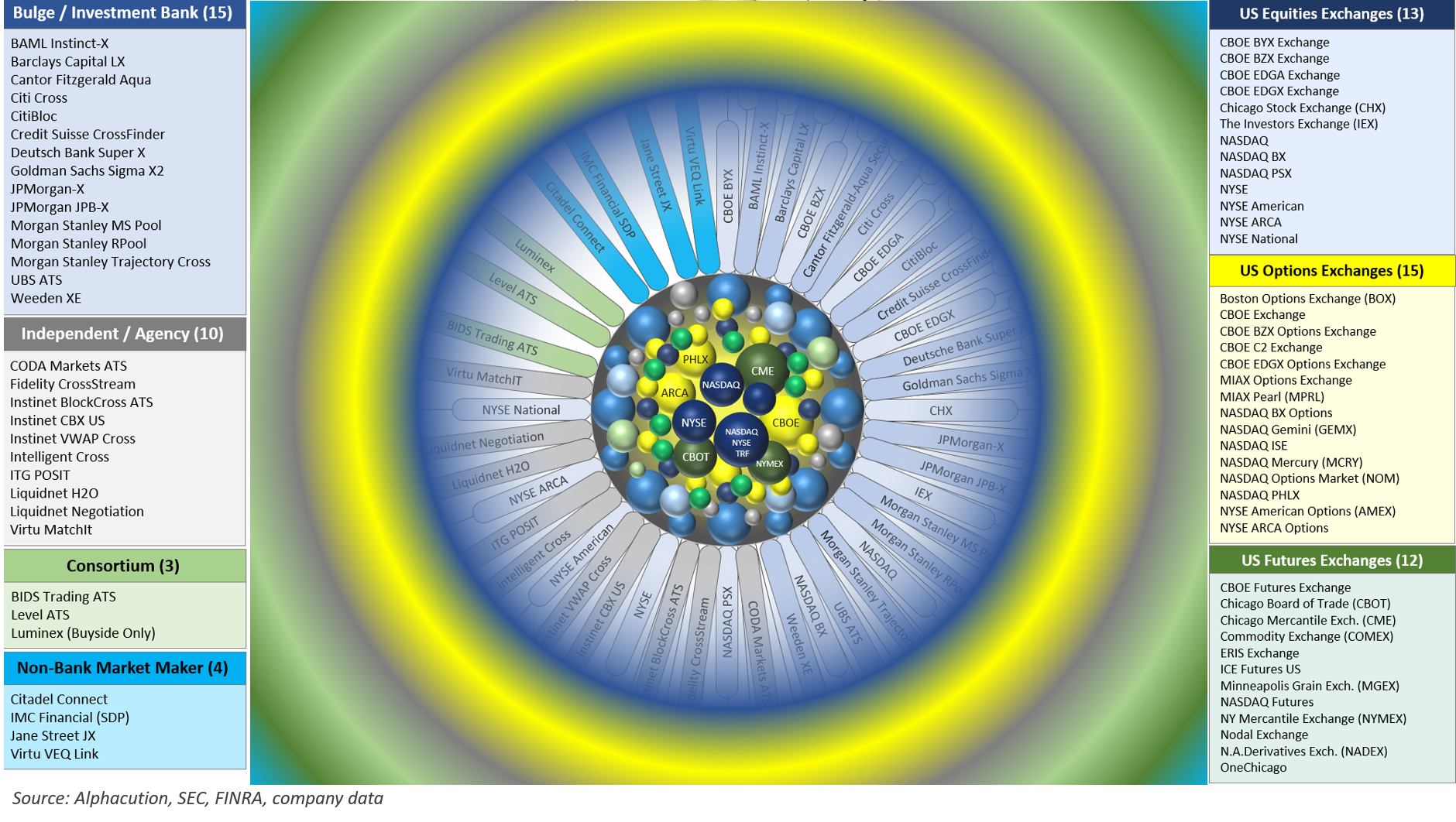 And yes, as insane as it may seem, I agree that it’s plausible that the 15th, 16th and/or 17th US equity exchange mechanism could provide incremental improvement upon the existing – uh – configuration. But, for what? Now that retail “investors,” with funds parked at Charles Ameritrade and the Robinhood cryptomancery, can engage in frictionless, zero-commission “investing” – the casino equivalent of paying the house by doin’ alotta nothin’ with your attention at the penny slots – are we now saying that market structure should bend over backwards to provide the same fee-less fee structure to hedge fund managers?

Ride the highways surrounding any US metropolis and the preponderance of billboards allocated to legal services is all the proof you need as signal for the state of play. When market constituencies – from pedestrians to institutional investors – start lawyering up to fight over scraps and handouts, you know the thing in question is in decline, or still depressed – plus, the counterfactual would send an entirely different signal.

If lowering trading costs is still the best argument for the umpteenth new exchange mechanism for a market landscape where retail players already play for free – and all the while one-by-one legendary traders like Louis Bacon and legendary investors like Leon Cooperman or maybe Jeffrey Vinik shutter their funds; and, some of the most sophisticated prop firms (that shall remain nameless, for now) lay off half their workforce(s); and the list of sell-side players exiting US equities continue to grow –  then the message on the metaphorical billboard for this market should be quite clear, no? After all, in a capitalistic market structure where price discovery – rather than price generation – and capital formation are supposed to be the pillars, why has free trading become such a priority?

Now, as I feel the tug of a much longer rant coming on, let me keep that powder dry for another day and instead work towards a close: Maybe a white hot debate about speed bumps and transaction taxes and other complexities is not the best path. Maybe there is a page from the “keep it simple stupid” (KISS) playbook that would work better than the market complexities we have; the ones that seem to insist on being promoted further.

The Herfindahl-Hirschman Index (HHI) is a widely accepted measure of market concentration. It is currently used to measure counterparty concentration risks in OTC derivatives. Beyond that, the CFTC manages a “large trader reporting program” as a means to identify concentration levels in certain futures and options products. Maybe the Herfindahl index could be used in equity (and equity-linked) markets, as well. Not at the position or product class level, but at the macro listed inventory level. This way, enough diversity of counterparties is maintained to keep costs competitive, but more importantly, to prevent one or two players’ outright dominance.

At a mid-2018 fireside chat-style interview of Ken Griffin, founder of Citadel Advisors and Citadel Securities, Aaron Ross Sorkin asked: “If 1 of every 5 stocks trades through Citadel, is that too big?” Ken’s reply: “No, because the market has the resiliency to absorb us not being in the market on a given day or week or month. There’s enough excess capacity amongst our contemporaries that if we weren’t there, the market would clearly function and function in a competitive manner.”

With each new week bringing another exit or downsizing by those “resilient contemporaries,” I’d say Ken is tryppin…

Happy Thanksgiving. Be sure to count those blessings this year…