~ This post is a continuation of Decay of Knowledge, Rise of Tech Debt ~

Unless you are among the short list of folks with detailed understanding at the crossroads of financial market microstructure and highly-automated trading, the term quote stuffing might not ring a bell. But, since the concept behind this loaded term is germane to the points I want to make here, it is worth taking a moment to wrap your head around the basics. The parallels between the kinds of shenanigans that go on inside financial market microstructure and the emerging study of the “attention economy” or an “attention market” are fascinating.

First discovered by Nanex in 2010 (shortly after the Flash Crash), quote stuffing is an automated trading technique that is used to flood trading infrastructure – namely, “matching engines” and the surrounding connectivity – with quotes that are then quickly cancelled. The goal of this strategy is to spike data flows to a point that surpasses the bandwidth capacity of the target trading infrastructure. This manipulative move is designed to delay market data feeds and ultimately create fleeting trading opportunities from the ensuing market confusion and disparate latencies among various feeds and liquidity venues that make up the broader trading landscape. In short, quote stuffing creates data bottlenecks that result in exploitable opportunities given what certain market actors already know about the limitations of the underlying technologies that make up modern trading infrastructure.

Hold that picture for a minute. Now, let’s return to our DIKW pyramid first presented here: The creation of data – specifically, in this case, in the form of media content – has become exceedingly cheap to produce in a hyper-connected, technology-rich and digital media world. Moreover, the rate of data flows can be manufactured to be much greater than our ability to consume them. Our hypothesis here is that exploitable opportunities have emerged from these activities that are eerily similar to those presented above in the trading infrastructure example. By way of visualization, we must upgrade the DIKW pyramid diagram to include manufactured or manipulated content and propaganda – otherwise known lately under the umbrella of “fake news” (see Exhibit, below). 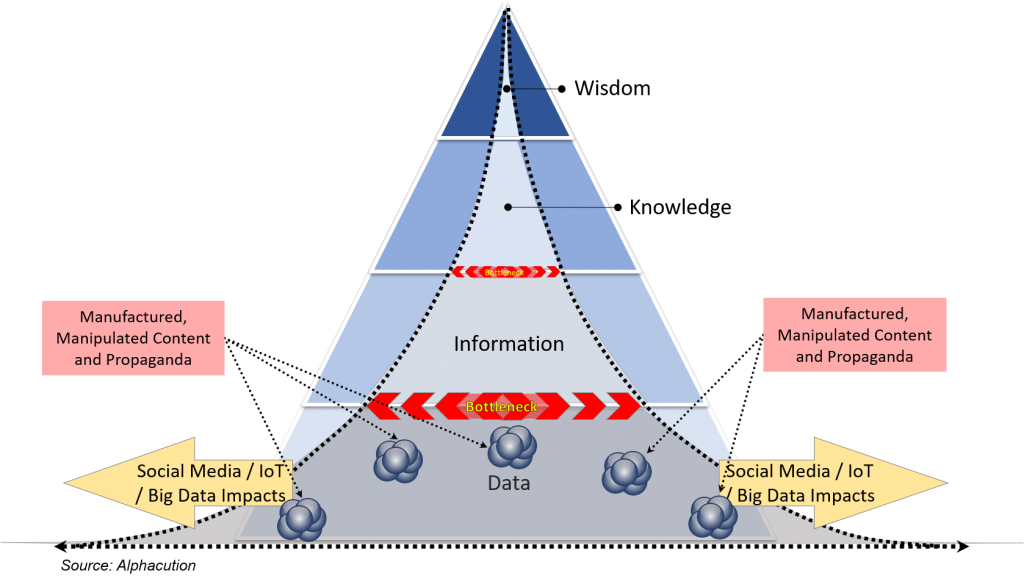 Similar to quote stuffing methods that might also create the illusion that buying demand for a target stock is increasing or decreasing, mass-produced and fake content can influence perceptions of sentiment, and therefore, ultimately actions outside in the real world. Those who care about this phenomenon – which eventually should be everyone tied to sources of digital media – are just beginning to figure out the its specific impacts.

The keys to this trick are the existence of a bottleneck and the concentration of attention.  In this example, it is perversely clever to have had a vision large enough to conclude that collective intelligence is limited, that collective attention is concentrated enough on a single or short list of platforms, and that the tools and methods are available at such a low cost to actually influence collective sentiment enough to augment the probability for the success of one outcome over that which might have happened organically.

Of course, the attempt to understand and educate ourselves about this phenomenon is front and center in the latest media coverage given the political climate.

Now, the relation that this phenomenon has to our core objectives here at Alphacution are these: Slowly but surely, our professional and personal worlds are merging. With each passing day, it becomes difficult to distinguish between the time and attention spent on personal matters versus professional matters. With personal technologies playing a more pervasive role in the 24/7 scope of our lives, the level of human capital productivity is therefore influenced by the level of distraction and misdirection that they are increasingly capable of inflicting on behaviors, workflows, and process efficiencies.

Meanwhile, as human capital becomes more brittle with distraction and more pressured to produce more with fewer of us around, automation – via information technologies – grows almost totally without any headwinds. If certain highly-manual processes could be replaced with blockchain or more DIY bank branches could be installed today, it would already be done. It’s just a matter of time.

This is a big topic, but nevertheless represents one of those factors in the estimation of total cost of (technology) ownership – and the frontiers of financial services automation – that is elusive, and therefore, topics that we here at Alphacution care deeply about.

Words of warning for now: Be very careful where you place your attention…