Squeezing more performance from less costly technology footprints is a perpetual imperative for all businesses in the digital age. Unlike the latest – and ongoing – turbulence on the surface of the global markets seas, something slower, somewhat mysterious and much more evolutionary is going on down in the deep.

One might argue that the largest global banks head the list of those businesses that are among the most in need of “more-for-less” transformation. As a result, monitoring the impact of events such as the Deutsche Bank – Hewlett Packard Enterprises information technology outsourcing (ITO) deal is of such importance. Alphacution has developed a detailed and quantitative case study to illustrate the bank- and business division-specific – impacts of this arrangement as well as the implications for improved monitoring of the transformations of other large entities in the financial services industry (FSI) ecosystem.

First, some quick background:  On February 24, 2015, Deutsche Bank (DB) and Hewlett-Packard (since re-configured as Hewlett Packard Enterprises – or HPE) announced a 10-year,”multibillion dollar” agreement to further modernize DB’s global IT environment with the aim to significantly reduce related infrastructure costs. Under the terms of the agreement (the financial value of which was not disclosed) and which mainly covers wholesale banking IT infrastructure (which includes DB’s Corporate Banking & Securities – CB&S – and Global Transaction Banking – GTB – divisions), HPE will provide dedicated data center services on demand including storage, platform and hosting – which also includes a customized HPE Helion cloud solution. Of note, DB will retain activities such as IT architecture, application development and information security.

Disclaimer: We are still waiting on some critical data to be released for 2015. According to DB, the Annual Report 2015 and SEC Form 20-F (with additional and detailed financial disclosures) will not be released until March 11, 2016. However, based on the data that has already been released in interim reports, we can provide a meaningful update to complement a ton of historical data that we have already assembled. With that, there are two key points that we want to make with this commentary to set the stage, including hardware / infrastructure spending trends and headcount segmentation.

Hardware / Infrastructure Spending Trends: Unlike many of its peers (particularly in the US), it turns out that DB provides decent transparency on its technology and data spending patterns, including additional transparency for purchased and internally-generated software. (On scale of 1-5, with 5 being best, we internally grade DB’s model at 3.5, which is among the top 10 models (where n=56) and the highest among the largest global banking groups). Without going too far into the minutiae that can be found in the case study, we can distill the available data into the following exhibit with estimates for the comparison of year-over-year changes in software and hardware / infrastructure spending for the 9 years ending December 31, 2014. 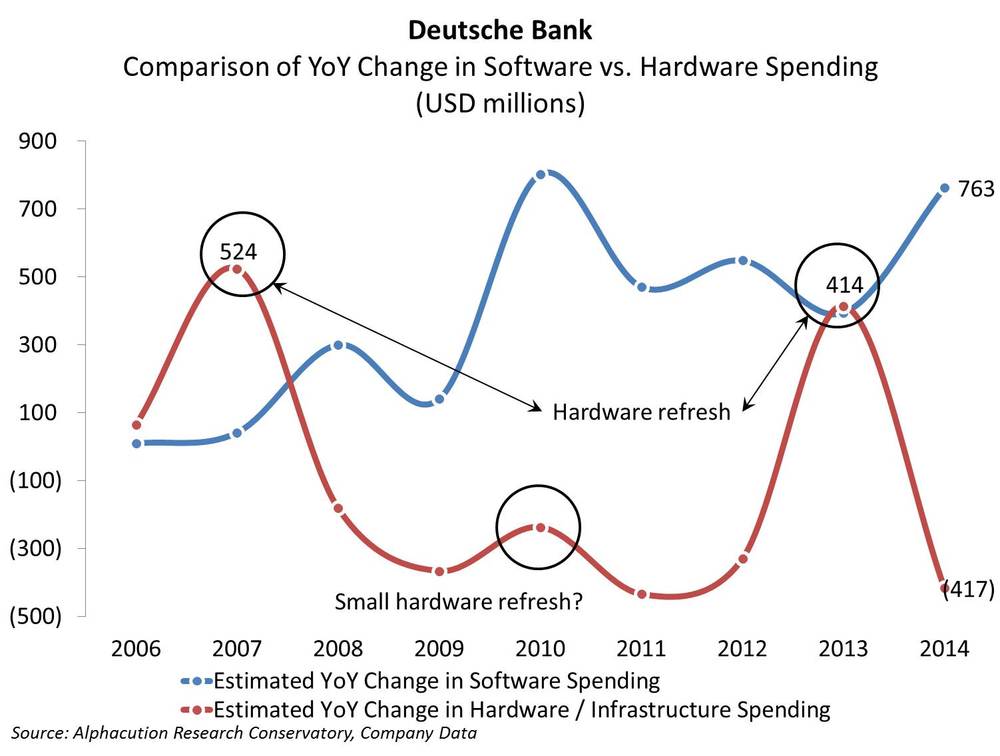 In this illustration, numerous fascinating observations are brought to light – over and above the fact that this level of transparency on technology spending is rare. (Most banks do not provide sufficient transparency on the “pieces” to assemble such a clear puzzle.) The first notable observation is clearly how the IT infrastructure “refresh cycle” spending patterns are distinguishable from the maintenance cycle. Somewhat more nuanced than this is that the cost of the “2013 refresh” is declining relative to the “2007 refresh” – an indication of some IT budget pressures. Secondly – and as we discussed in the recent post: “#CrowdedOut: Banks’ Technology Spending Paradox” – the extreme increases in internally-generated software development expenses since 2008 in order to provide enterprise functionality to satisfy new regulatory imperatives has created a “crowding out” phenomenon that places significantly more pressure on an already pressurized technology budget.

Still, we know that these observations do not fully and appropriately set the stage for a tipping point that result in the aforementioned HPE ITO deal. From prior work on Alphacution’s total cost of ownership (TCO) framework, we know that the IT human capital component of TCO is significant; often representing at least 1x (and usually more) the cost of all other factors combined (i.e. – hardware + software + data spend). In the following exhibit, we begin to showcase the impact of IT human capital costs, and further demonstrate how the number of IT-related full-time equivalents (FTEs) necessary to manage the platform on a proprietary basis may be far too heavy for the competitive necessities of the digital era. 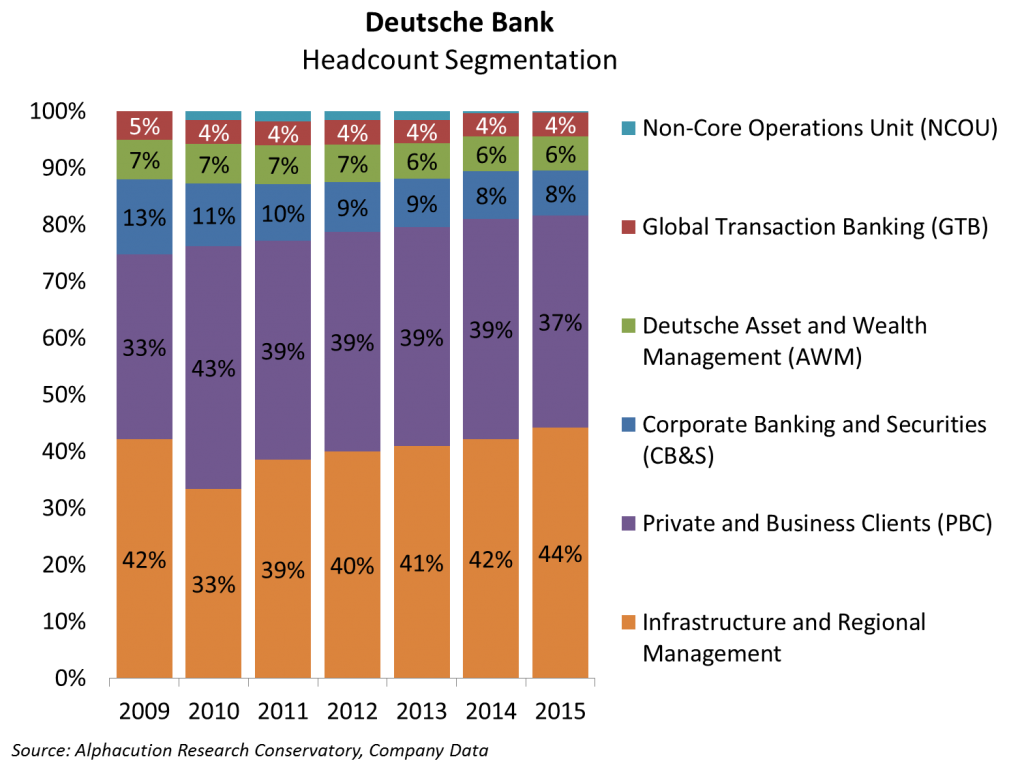 Consistently representing the greatest portion of headcount among their current 6 segments, DB defines their Infrastructure (including Regional Management) segment as follows from the 2014 Annual Report: “The infrastructure functions comprise departments such as Finance, Legal, Compliance, Group Audit, Risk, Communications, Corporate Social Responsibility and Public Affairs, Human Resources, Group Technology and Operations, Group Strategy, Corporate Insurance and DB Research. These units support the Management Board through their strategy, risk management and control functions.” In short, the Infrastructure segment covers much more than IT personnel – which further means that we need to make some key assumptions from here on out on our way to TCO benchmarking.

Based on reported 2015 period-ending headcount (FTEs) of 101,104 – a net INCREASE of about 4,500 FTEs since Q2-2014, by the way – Alphacution estimates that the “Infrastructure” segment represents about 42,000 FTEs as of the end of 2014. (We will know more on March 11th.) And, with weighted average annual compensation of about $136,000, we can come much closer to a time-series of fully-loaded TCO from which to evaluate the causes and effects of this DB-HPE deal – plus what implies about the pace of and need for transformation among other key members of the FSI ecosystem.