“The struggle itself towards the heights is enough to fill a man’s heart. One must imagine Sisyphus happy.” – Albert Camus

This one has a long fuse, but you might enjoy the customary overallocation of pictures as we get into it:

In a March 22nd note entitled “The Great Leverage Unwind” published by Guggenheim Investments, Global CIO Scott Minerd estimates the impact of the COVID-19 pandemic like this:  “…we would need to see about $4.5 trillion of quantitative easing (QE) before everything was resolved. This is in addition to emergency lending through the discount window, dealer repo operations, central bank liquidity swaps, and the Commercial Paper Funding Facility, Primary Dealer Credit Facility, and Money Market Mutual Fund Liquidity Facility. That would take the Fed’s balance sheet to at least $9 trillion, or about 40 percent of last year’s gross domestic product (GDP).”

Now, while we all have our faces fully committed to being pressed up against our screens – in a constant state of jones for the next tidbit of information about markets, politics, pandemics, the future of everything, and the deafening echo-chamber of opinions about all of the above – and all while we anxiously await some of the first market maker data from Q1 2020 to trickle in next week – I thought it might be timely and paradoxically refreshing to take a giant step back to make a widest-angle observation of the largest forest that the available data would allow. Given Mr. Minerd’s prognosis, I offer this:

As the US lender of last resort, the trajectory of the Feds balance sheet – namely, total assets – has taken a rather dramatic turn ever since the Global Financial Crisis (GFC); a divot that was hardly repaired some dozen years later before now attempting to fill the canyonous economic crater just now being caused by the COVID-19 Pandemic (CVP). As of April 8, that time series – including Guggenheim’s near-term estimated destination – is below: 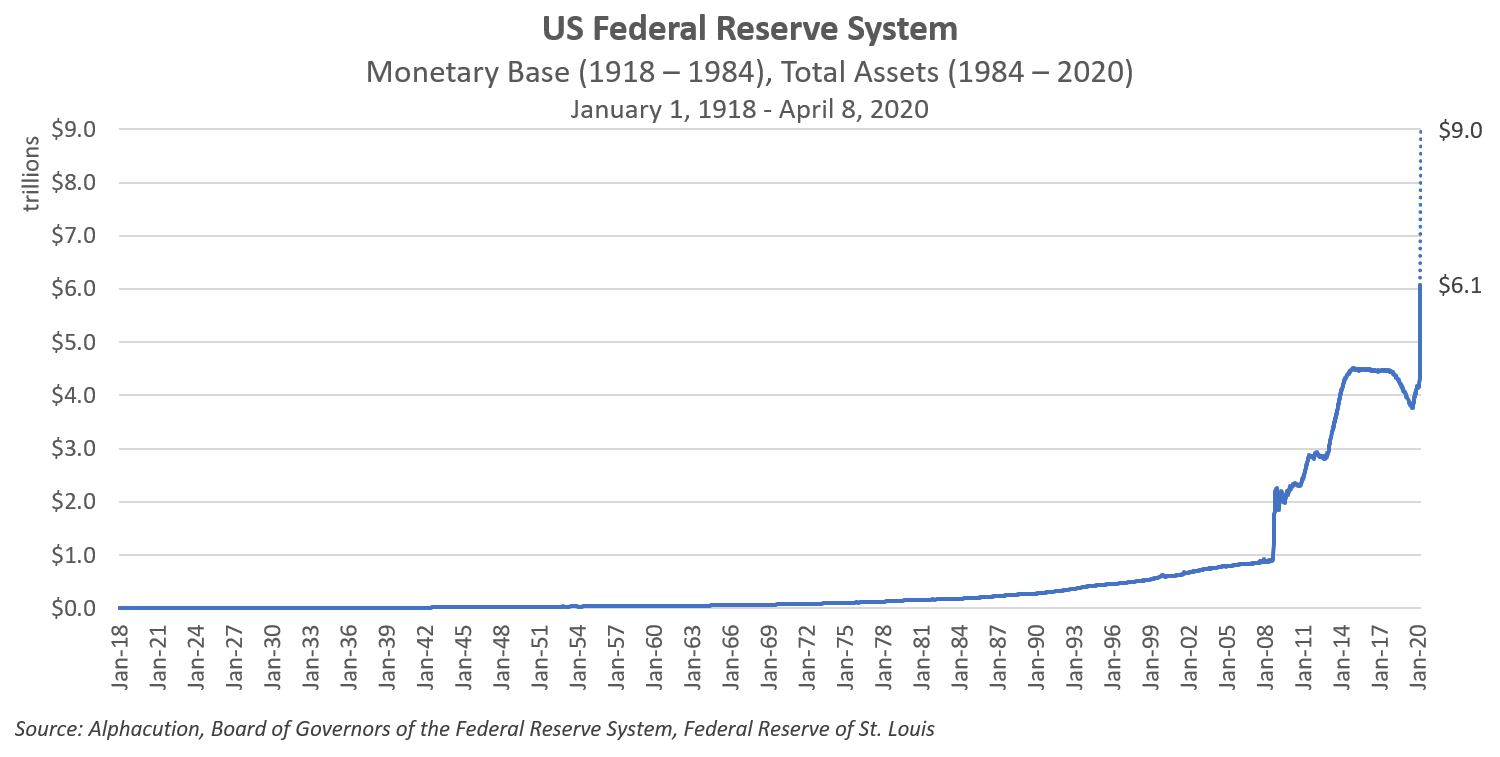 Maybe not in the immediate future, but eventually, the analysis that follows from here will show that this $9 trillion mark may be low. Nevertheless, here’s how that kind of estimate looks in terms of periodic changes relative to a century of Fed data, including the impacts of the GFC: 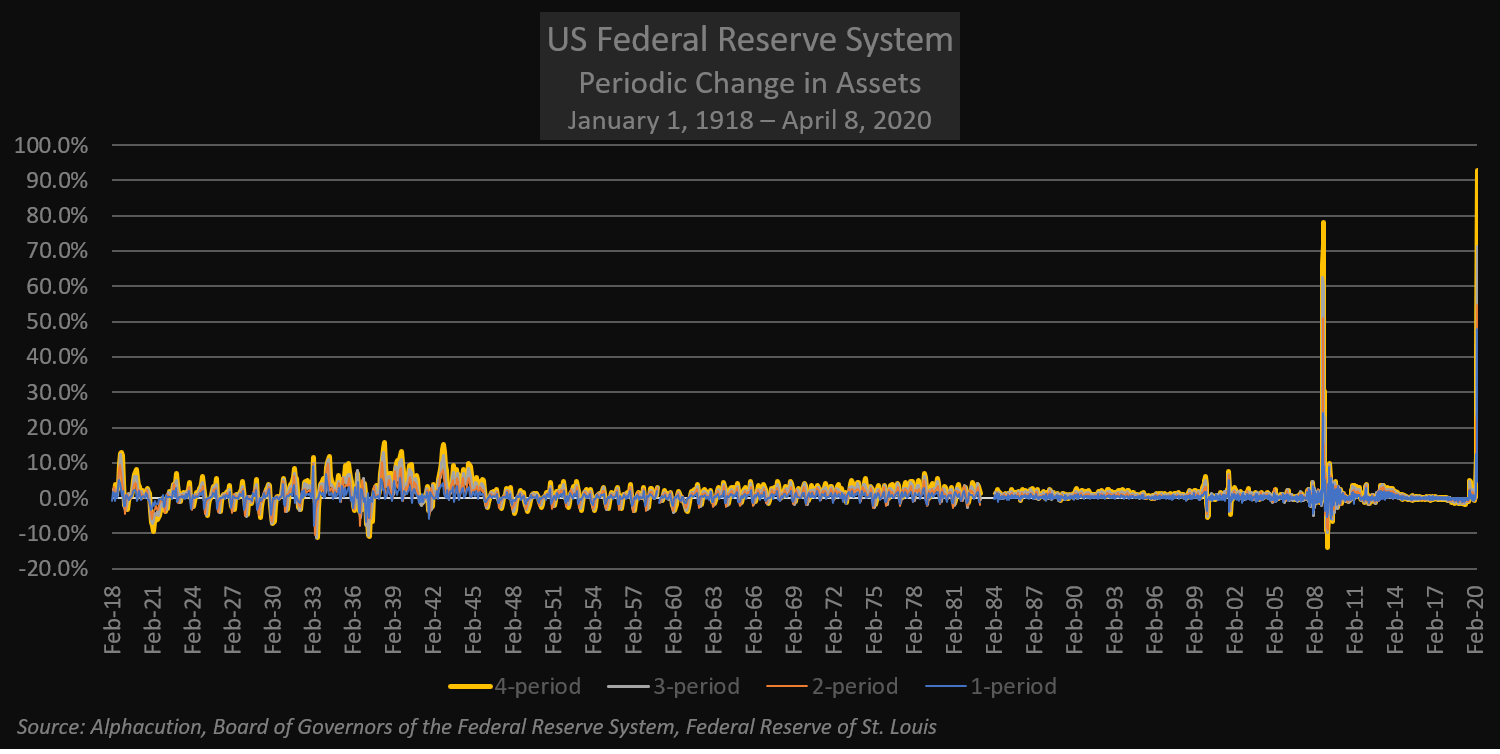 Let’s build on a rationale for a better estimate: Sticking with a wide lens and a long time series, the chart below illustrates 230 years – up through yesterday (April 15th) – of US total debt. For some reason, this hockey stick makes me think of Tricky Dick and gold, but I can’t quite put my finger on it… 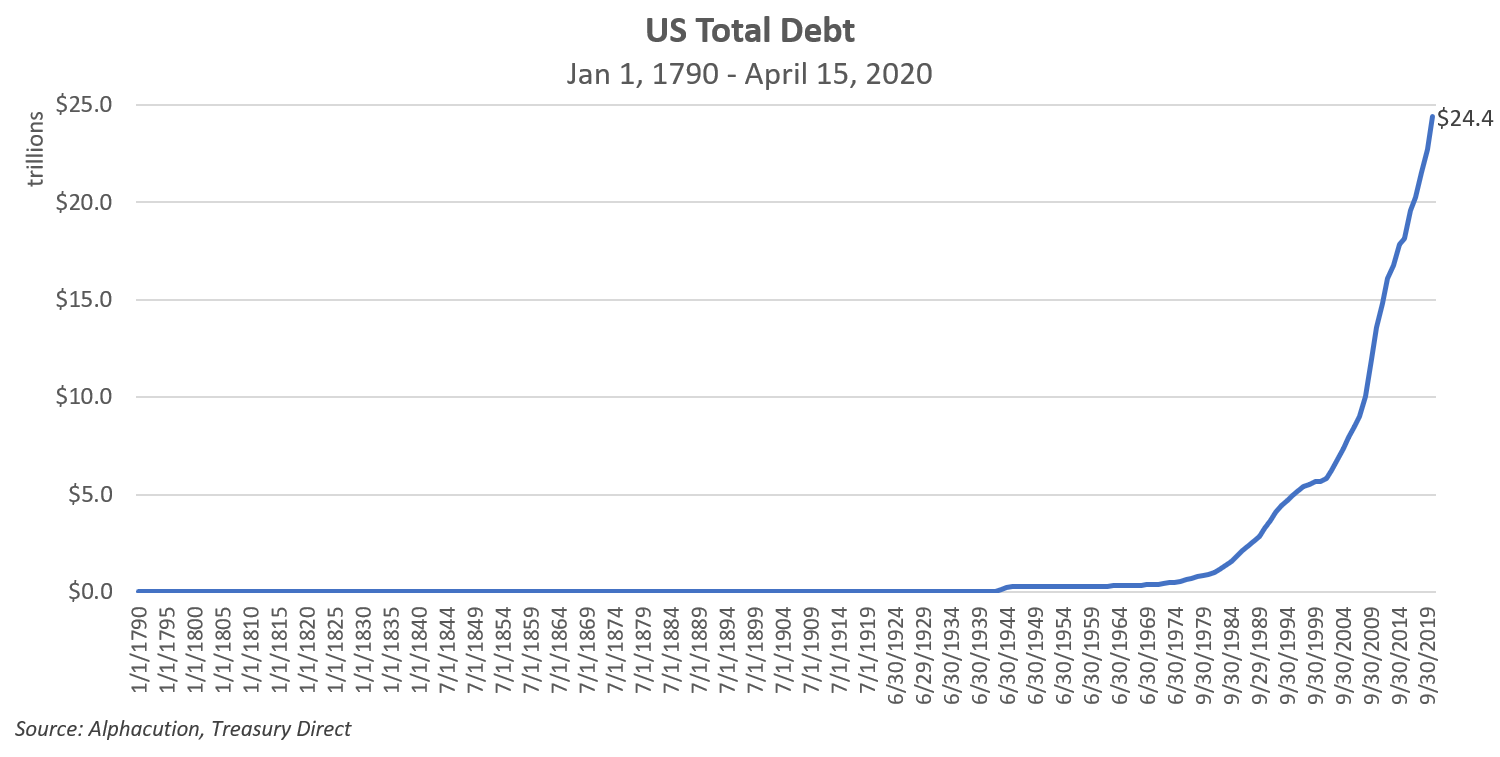 In case you’re keeping detailed score at home, the public portion of that debt – made up of marketable Treasury Bonds, Notes, Bills, etc. – amounts to $18.4 trillion as of April 15, 2020. Note the change in slope after the GFC. By the looks of it, we should expect another change in slope as a result of CVP. See below: 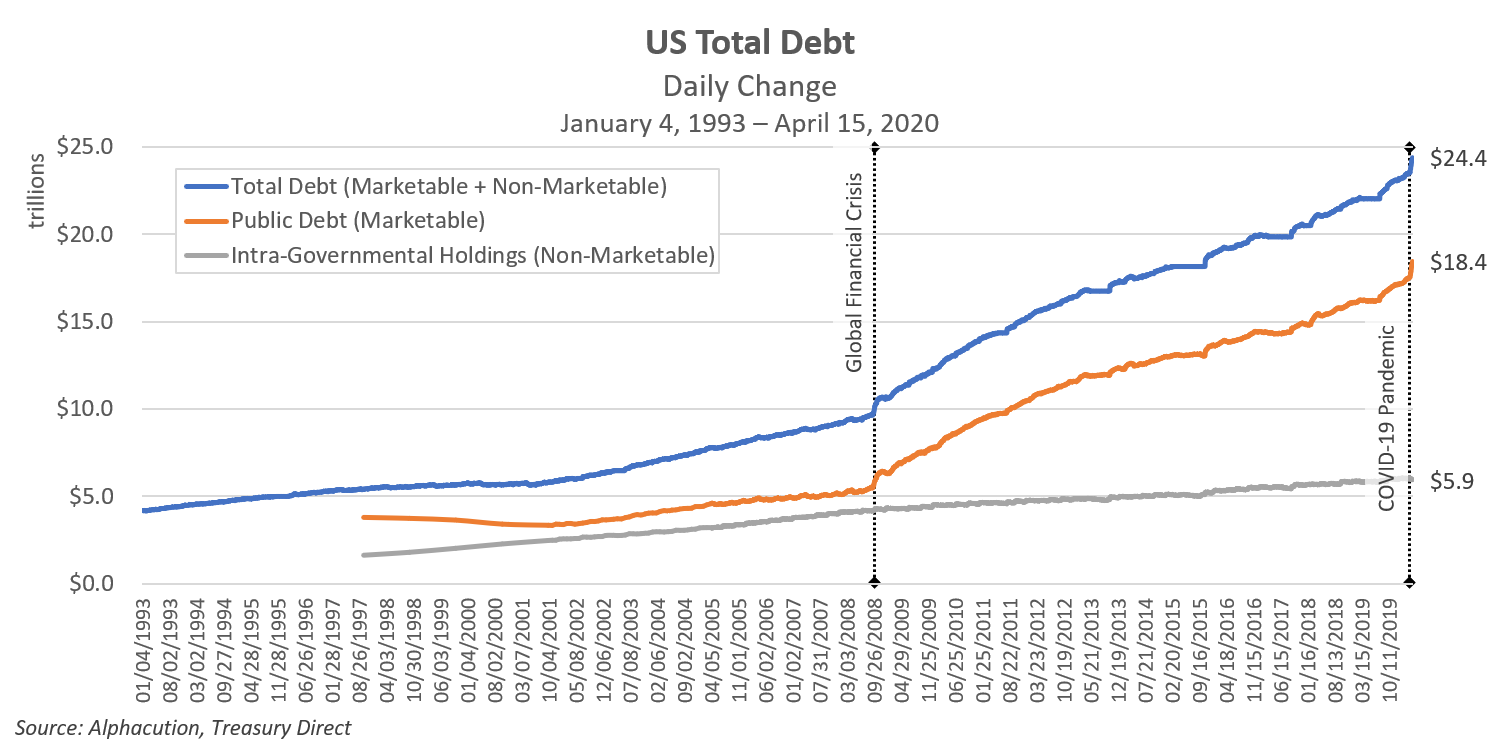 Meanwhile, with all collective headspace focused on the pandemic, we have temporarily hit the pause button on what tax revenues – and budget deficits – will look like for 2020 (and beyond) to perform insult on injury in the trajectory of the Fed hockey stick. To wit: Below, is US tax revenue as a percent of GDP from 1962 through 2019 – plus a swag of what 2020 might look like, based on what happened during the GFC: 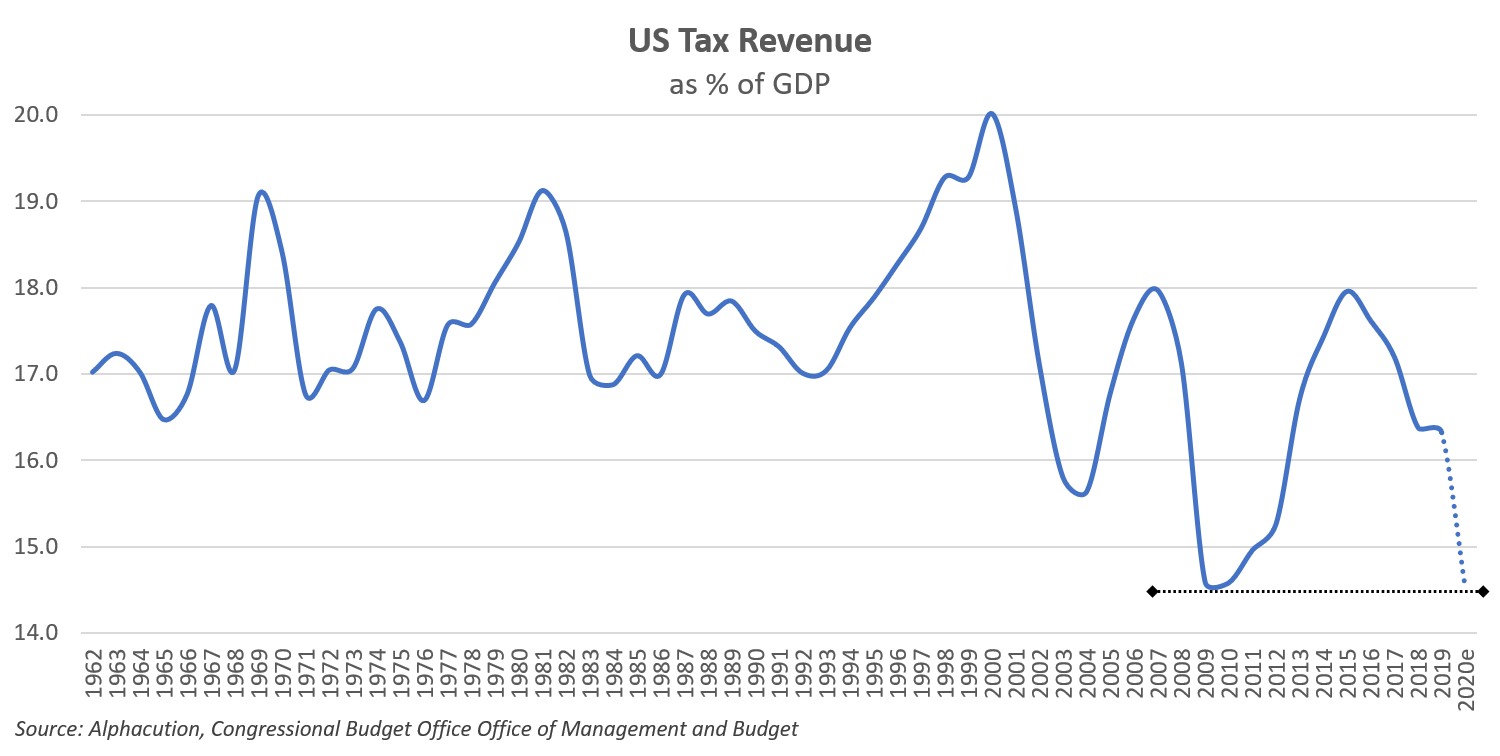 Expanding on that, the chart below illustrates the change in the sources of that tax revenue from 1962 through 2019, which leans increasingly on beleaguered human capital. ‘Nuff said… 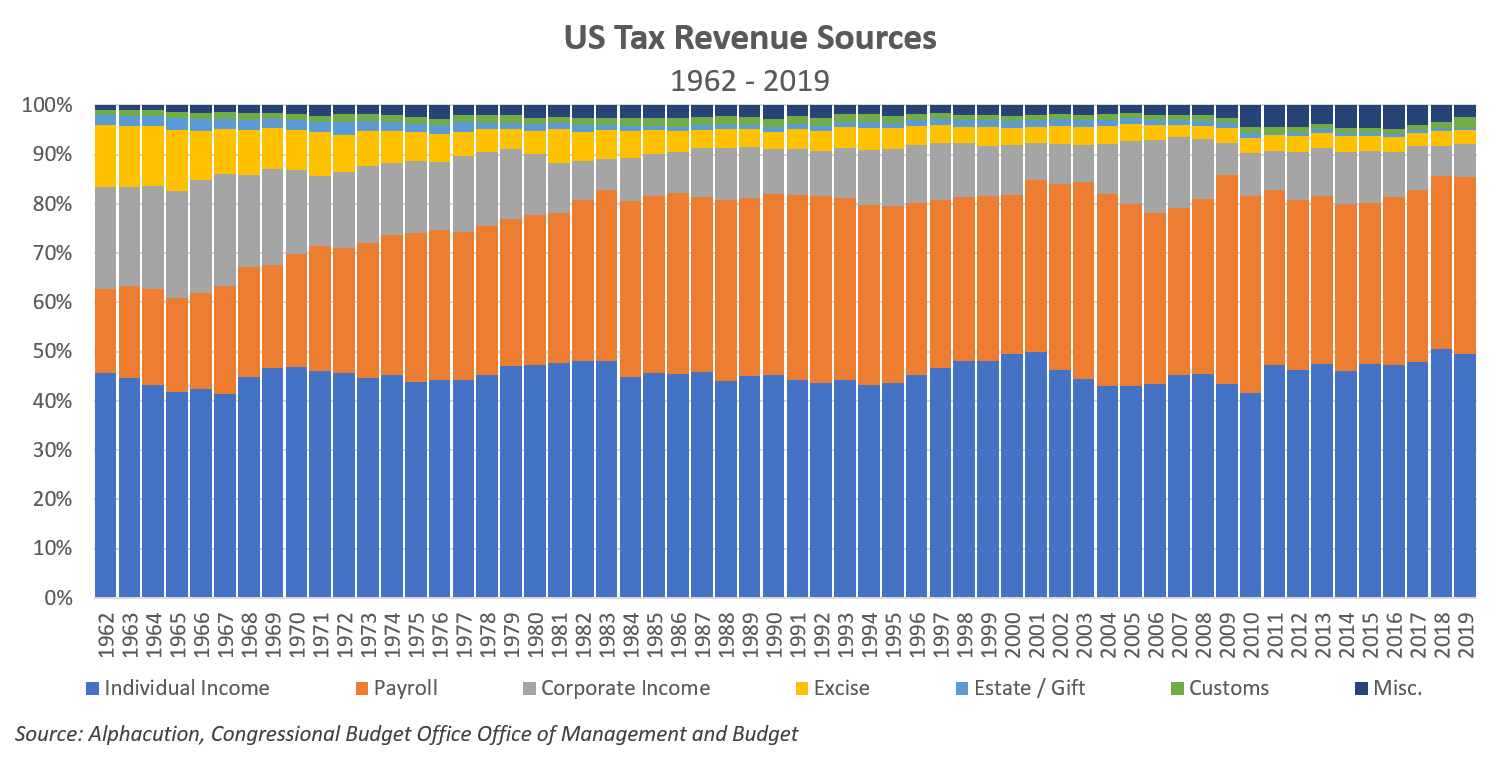 This brief storyboard brings us to the end of our opening fuse with a juxtaposition of US total debt and Fed assets, below. Here, consider the possibility – or, at least the growing probability – that, after a century or two or three, private capacity to lever has been reached (having been crammed into every housing, automotive and higher-educational nook and everyday consumer consumption cranny) and the likelihood that the transfer of leverage from private to public (via Fed) will continue to increase hyperbolically given the current drivers. Also, consider that whether the catalyst for such transfer is financial or non-financial is irrelevant. It doesn’t matter, for example, why an airline’s revenue crashes or its expenses surge. For a spectrum of reasons, companies and people will always have emergencies. This is no different than a trading strategy: When you hit capacity, performance suffers (at best) and other funky, sometimes existential, things can happen (at worst). 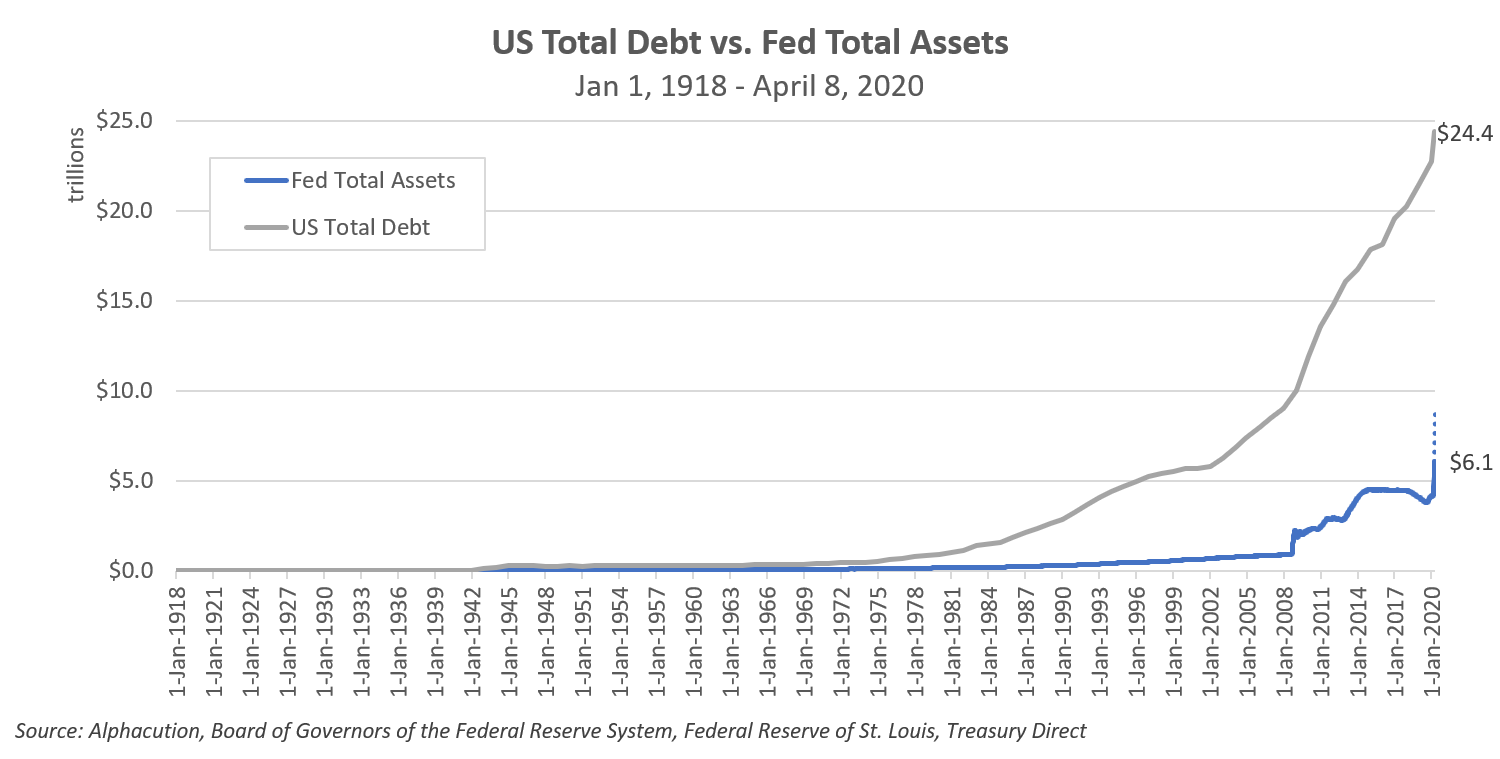 So, with this abbreviated tour of macroeconomic factors as backdrop, we arrive at the thrust of the point here: Below, is Alphacution’s rolling comparison of volatility spikes – according to VIX – for the various periods since and including the GFC, with the goal of trying to visualize how long we should expect volatility to remain elevated (defined as VIX generally greater than mid-20’s)… 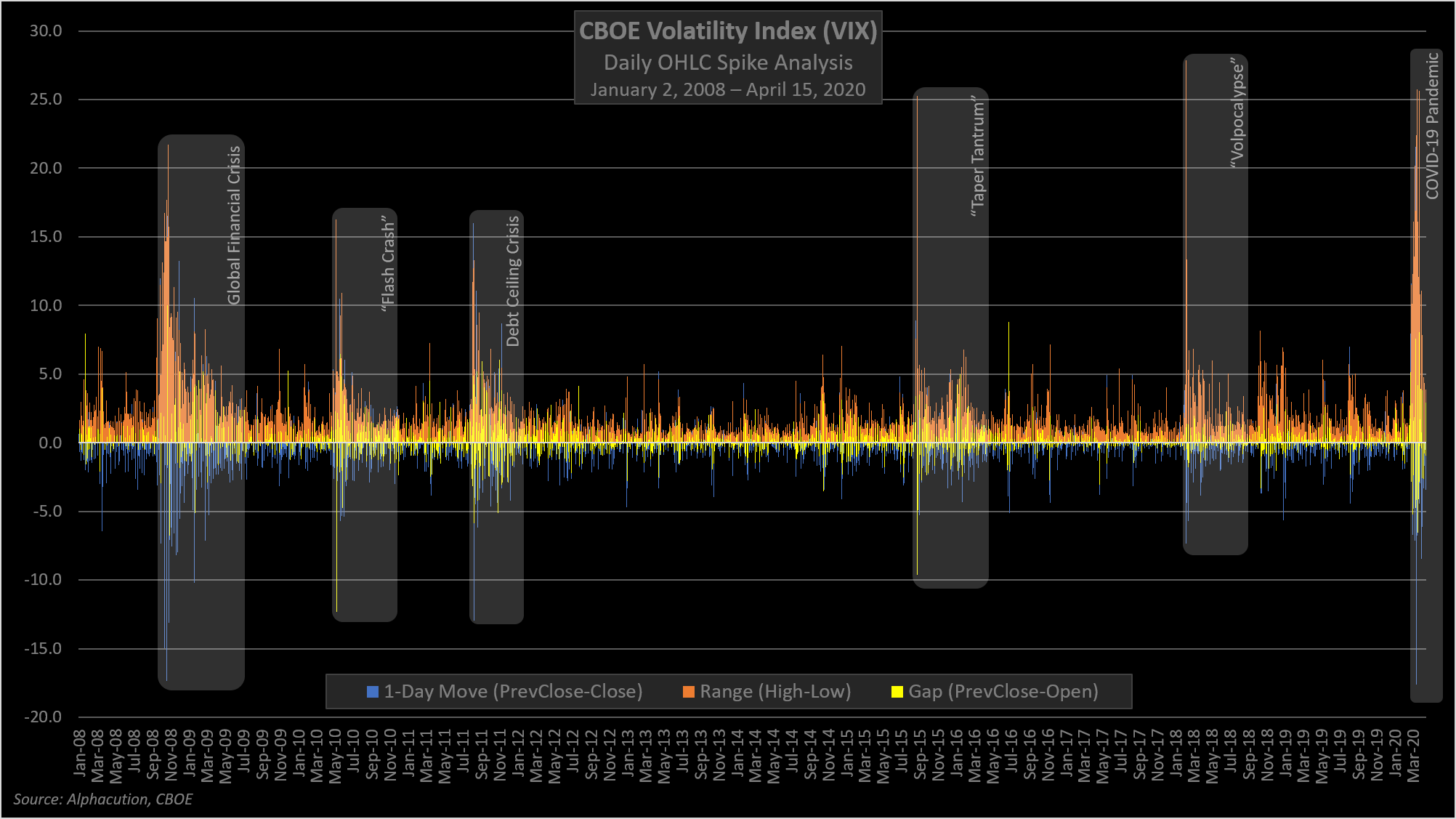 This framing brings us to our final picture for this one; a comparison of the age of the volatility elevation period between the GFC and the current CVP. What this chart shows  – now just 37 days into what we think is at least a 200-day phase – is a decline in volatility that is notably faster than that of the GFC, despite the growing evidence that the CVP period will be worse – holistically – than the GFC. 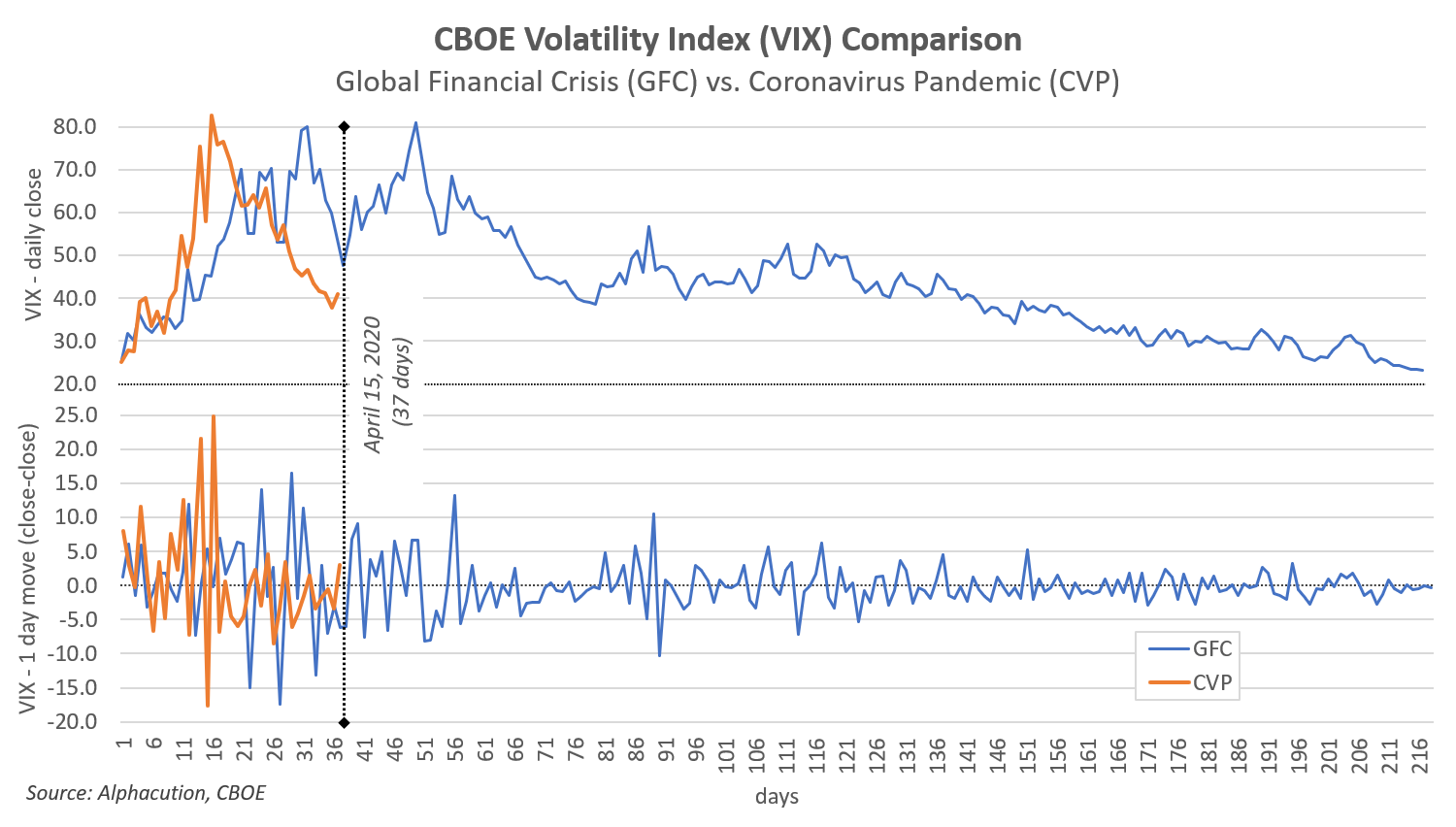 Now, the idea that “this time is different” or that the Fed, SIFI’s (Systemically Important Financial Institutions), and SIFMU’s (Systemically Important Financial Market Utilities) are much more adept at cooling the contagion of extreme volatility events may explain the divergence between now and back then. And, yes, it’s important to remain hopeful and active in our optimism…

However, if you were paying any attention to the fuse, chances are we are approaching the end of some kind of supercycle – the kind that tends to sneak up on those with a narrow lens trained on the trees and not the forest. Meaning: Timing is always tough, but stay vigilant – personally and professionally – about what typically comes at the end of a fuse…

(I did say paradoxically, no?)

Until next time, please stay safe out there…