Clear your mind and repeat after me: “I am a revenue center.”

Practice this mantra until it influences your perspective on your own work.

I actually tried this stunt at the end of a presentation to an audience of data specialists and related personnel at a recent FIMA Canada conference. Though there appeared to be a quiet skepticism at such an unorthodox request from the stage, a surprisingly large portion of the group seemed to get the liberating nature of the exercise. A few actually participated in the audible! Others, we can only guess, participated in their heads. Either method is fine.

In any case, the genesis for the need for such a realignment of perspective comes from the fact that many of us have been “sold” the idea (by management) that we are part of the cost structure; that we are part of the organizational algorithm where only expenses exist. However, in order for optimal operational agility – some might say, “operational alpha” (a term I prefer, except that it’s trademarked by Northern Trust) – to occur, everyone in your organization must take ownership for driving the top line as much as anything else. In other words, a more widespread entrepreneurial mindset.

For those closest to the front or the top, the mantra is innate and axiomatic. But, certainly, the farther one goes in the workflow back from front-office “trigger pullers”, deal-makers and senior decision-makers, the less likely it is that such a perspective is held. Proximity to the trade, transaction or pivotal meeting generally takes care of this. But, in order for the rest of us – data managers, post-trade and other “back office” personnel, or legacy tech babysitters, to name a few of the most obvious groups – to tether our thinking (and efforts) to revenue generation, we must explore our participation in and value to various workflows. Here’s an illustration of the challenge (see Exhibit): 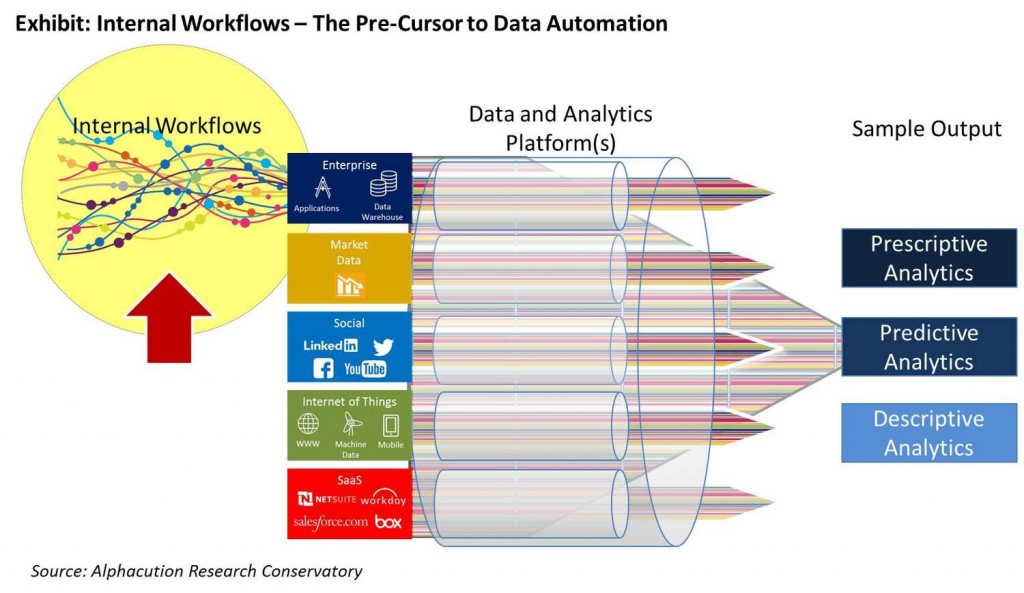 Internal workflows – at least a portion of which include a series of manual tasks – are the pre-cursors to enterprise data flows (and represent a boatload of potential process and solution innovation). The internal / enterprise data category is unique relative to others – like market data, social feeds, emerging data from the Internet of Things (IoT) and the output from software-as-a-service (SaaS) platforms, like Salesforce – because the data output of internal workflows is not inherently automated. And yet, the efficient flow – or, data fluency – of internally-generated data is critical to the success of your firm, to one degree or another.

Bottlenecks and other sclerotic components of internal workflows are where the spotlight of innovation needs to occur. For instance, if you are sitting in a role where a catalytic event is represented by an email or worse – gasp – a fax, then your seat is already marked for extinction. It’s just a matter of time. Distributed ledger technology (aka – blockchain) will eventually wipe out many of these seats in financial markets firms. Other developments in software and data innovation will chip away at those seats in the meantime.

We know from prior research conducted at a predecessor research firm – in concert with my friends at Thomson Reuters – that “people, politics and/or culture” is the greatest impediment to the adoption of digital-era tools, technologies and methods over and above hardware, software and big data. Moreover, oftentimes this scenario is true by a wide margin, according to various audiences of financial markets professionals. So, while “digital transformation” is often focused on new tools and technologies – and the variance in the total cost of ownership (TCO) of these solutions versus legacy versions is often used to make the case for their immediate adoption – it is actually the people embedded in various workflows that stand as the greatest challenge to the achievement of operational agility.

The advice here is paradoxical, but still effective nonetheless: If you are sitting in a seat marked for eventual obsolescence then you are better off putting a bullet in that seat yourself than waiting for someone up the chain of command to decide to do it for you. Here’s the translation for why: Managers will reward those who demonstrate creativity for the good of the organization, and punish those protecting seats at the expense of the organization. This is particularly valuable for those of you who have a lot of career ahead. For those of us who are a little more seasoned, maybe the end is close enough to be coasted. But, either way, massive unprecedented change has become the norm. You are better off engaging in planned obsolescence and creative destruction than becoming an immutable expense cog. If successful in demonstrating contributions to operational agility, I assure you that someone will invite you to do it again and again and again.

Sure, this is all easier said than done – but then again, I didn’t just stumble upon this advice in a fortune cookie. In any case, there is little downside in practicing the mantra:

“I am a revenue center.”