Has (information) technology made us smarter?

And, are there costs that counteract – if not, neutralize – the perceived benefits of technology?

Given the intangible and elusive nature of the impacts, plausible answers to increasingly common questions like these usually defy placement into an analytical framework. This post is our attempt to begin to overcome such impediments and be as objective as possible about the full range of impacts from technology, whether the use case be personal or institutional.

Our hypothesis on the decay of knowledge and the rise of “tech debts” is based on the idea that knowledge decay in the digital era is influenced by the following chain of logic:

Tech debts tend to neutralize – if not, overshadow – the mass improvements that have been made in information access, task efficiencies, increasingly immersive entertainment experiences, and an expansive spectrum of other creature comforts. In other words, it could be said, generally, that information technologies cause us to be increasingly distracted, intolerant, isolated and apathetic – all of which represent headwinds against the accumulation – or even the maintenance – of cognitive skills. (And, this is all without mentioning that all social media platforms are specifically designed – much like a cigarette or many processed foods – to be addictive; to grab and hold on to your attention for as long as possible.)

Now, by way of refere 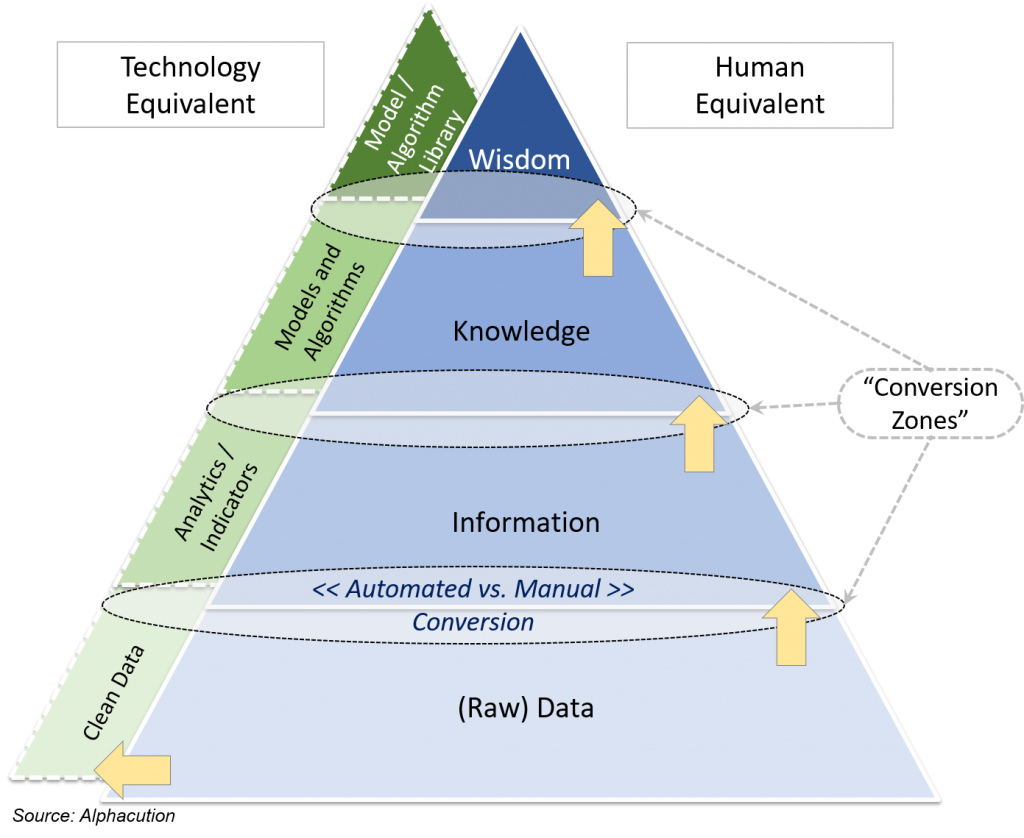 nce to the DIKW pyramid – a framework that describes the structural hierarchy and functional relationship between Data, Information, Knowledge and Wisdom – we can diagram the potential for how these phenomena evolve from here.

In Exhibit 1 (left), we present the traditional version (blue) and our automated, technology-equivalent interpretation (green) of the DIKW pyramid. The critical activities here are what we call the conversion zones, where data is processed into information, information processed into knowledge, and knowledge processed into wisdom. Conversion from one level to the next is critical to harvesting the maximum value of the underlying data. And, as the pyramid shape implies – much like the manufacture of maple syrup – it takes a lot of data to produce a small amount of  wisdom.

Furthermore, here’s how core innovations of the digital era present challenges to the normal operation of this framework concept: Hyper-connectivity, easy and near-ubiquitous access to social networks, and mass-digitization of current and historical content are among a few of the primary drivers that are causing two major shifts in the traditional DIKW framework: the shape of the conversion chain and the value of the underlying data / information / content.

New shape of the conversion chain causes Intelligence Bottlenecks:  New sources of data – like the internet of things (IoT) or everyone connected to social networks who are now effectively “publishers” of data by default – have exploded in number and continue to grow exponentially. The promise of big data is now a part of the fabric of day-to-day life. Even given increasing process automation of data-to-information and information-to-knowledge conversion, raw data is growing much faster than our ability to convert it into human-level intelligence. 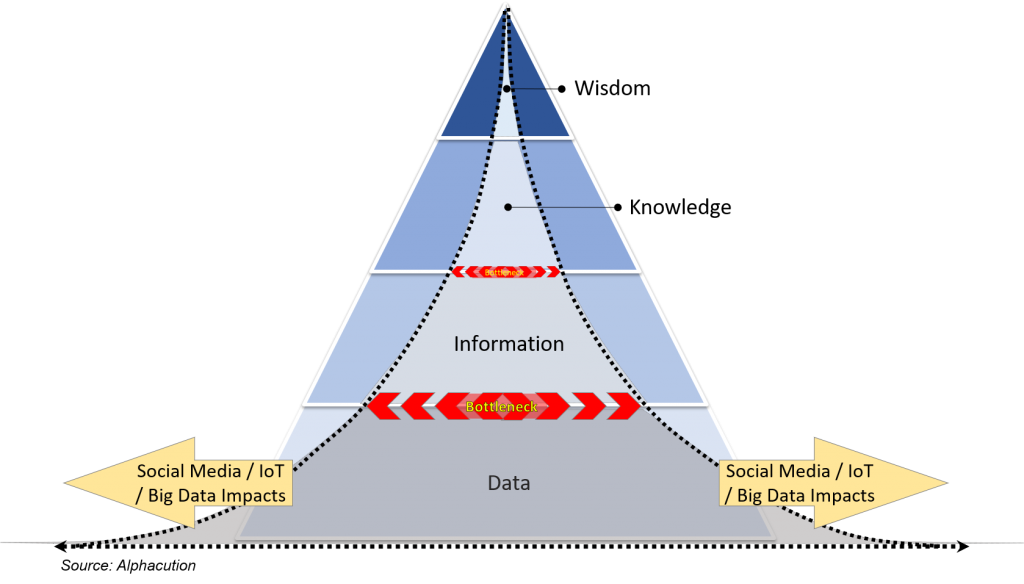 The resulting distorted shape of the DIKW pyramid causes bottlenecks in the base conversion zones (see Exhibit 2, right).

And, though artificial intelligence (AI) – sometimes wrapped in cuddly personas with names like Siri, Alexa and Watson – is playing an increasing role in reconciling such bottlenecks, we still have too many technological requirements – like, notifications and other alerts, software upgrades, app updates and reconfigurations – to attend to. It’s as if we suddenly had to allocate some of our limited attention to the functioning of our heart, kidneys, lungs and production of red blood cells without a commensurate expansion in cognitive abilities. A big part of the cost of personal technologies is the burden they place on our attention.

Value of data, information and content under significant pressure: This concept is deeply explored and uniquely presented in the book, “World Without Mind: The Existential Threat of Big Tech” by Franklin Foer, where it is argued that the likes of Google, Amazon and Facebook have:

“…presided over the collapse of the economic value of knowledge* which has severely weakened newspapers, magazines, and book publishers. By collapsing the value of knowledge, they have diminished the quality of it.”

[* As an important sidebar, I think the usage of the term “knowledge” is misplaced here – and elsewhere in the book – for reasons that we can debate elsewhere. “Content” would be a more accurate term – as in “the economic value of content” – because the knowledge that I possess does not automatically become your knowledge once you are exposed to it. For instance, my knowledge enters your DIKW hierarchy as data, information or content – and then it is up to you to assimilate that new piece of evidence into your understanding / intelligence / knowledge.]

In any case, it is true that the bar for the creation and distribution of content has become historically low given how easy it is to publish on social networks or set up a blog. Moreover, since it is well known that sensationalistic, extreme or fear-based content causes the most effective attraction of our attention, it seems that the popularity of content has now soundly trumped the credibility of content (because credible sources of content tend not to engage in sensationalism to the extent that those merely seeking popularity do).

In short, much of the information that formerly commanded a premium price can now be found for free because many of the traditional gatekeepers of information – like journalists and researchers – have been disintermediated by the ubiquitous platforms of tech giants and those who unwittingly donate their information to these open platforms. This dynamic serves to erode the flow of credible information, which ultimately becomes a factor in the decay of the collective intellect.

Unfortunately, the problem gets worse from here: Our analysis suggests that there is an additional factor that causes our hypothesis to have even more dire consequences than those presented here. Stay tuned for Part II – “Quote Stuffing and the Collective Intellect”

In the meantime, here’s our recommendation: Users needs to be more active in limiting exposure to their personal technologies, wherever possible. For instance, limit the notifications and alerts coming from the apps on your smart phone. And, though often not incentivized, technology designers need to continue to figure out ways to make their tools less intrusive, where less is more. Also – and I will not even begin to hold my breath on this one – there is likely a role for regulation to play here.

For more, visit the Center for Humane Technology.