If you happen to hear the drumbeat of these things called “operational analytics” getting louder, then you just may be dialed in to the subtle downstream impacts of some of today’s most common headlines related to financial enterprise transformation. For instance, the fintech revolution we are living through – with all its new-fangled and often overly-hyped gadgetry – is really about harnessing the opportunity for unprecedented process efficiencies. But, while it is a soothing distraction to daydream about deploying new digital tools during the ongoing regulatory hurricane, the economic impact that they will have on the FSI landscape is barely going to move the needle anytime soon.

Of course, there are exceptions to this broad brush stroke: The impact of evolving IT infrastructure solutions from Infrastructure-as-a-Service (IaaS) to software defined networks (SDNs) to any number of other high-performance compute and storage tools are already sufficiently mature to be making a major impact on architectures and technology buying patterns. A similar statement could be made about open source big data tools such as the Hadoop distributions from Cloudera and MapR. On the other hand, distributed ledger technologies (DLTs) – though revolutionary and cornering the market on hype – have a ways to go before impacting core workflows.

Here are the series of dominoes (with backup data) that we see falling that signal how process awareness is on the verge of coming into its heyday:

First, to varying degrees, front offices are under siege. Figure 1 shows an index of the change in front office personnel for the 6 quarters since December 31, 2014 for a large (G-SIB) European bank. The Global Markets segment is down in headcount by a heart-stopping 13.7% in 18 months, clearly standing out by a country mile relative to the other divisions – each of which are also down. 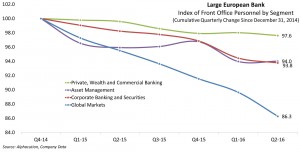 As far as I’m concerned, this data is a confirming indicator of the prevailing headlines, which are that a convergence of drivers – from skyrocketing regulatory costs to 500-year low yield curves (and historically low volatility levels) plus incremental process automation has put sustained pressure on IT budgets, the most prominent component of which is often human capital costs. But, to leave it there would be to miss the most fascinating chapters in the story (containing evidence that sustained transformation is upon us).

If front offices are being right-sized, then how is it that many of largest players are still weighing in near all-time highs of headcount? Figure 2 represents total full-time equivalent headcount for the same large European bank (for the 22 quarters ending June 30, 2016 – and including the all-time high set in 2011). 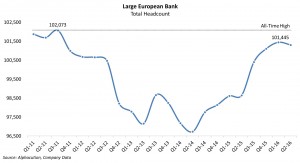 As of March 2016, this sample was within 1% of the all time-high, which seems odd for a bank living in the crucible of the aforementioned drivers. Sure, it’s one example. However, there are others. Figure 3 below illustrates the migration of Goldman Sachs total staff from 2004 through June 30, 2016. Albeit a rare entity in the ecosystem, GS is currently within 6% of its all-time high for staffing numbers set recently in September 2016. 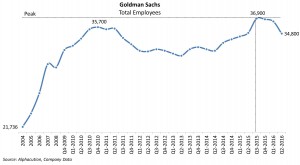 What is the source of this buoyancy? Our final chart of this large European bank provides some solid clues. While total aggregate front office headcount is down -1.8% over the period, back-office and platform personnel is up 10.1%, growing in each of last 6 quarters. 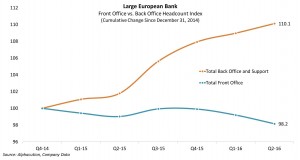 So, what does any of this have to do with post-trade processing, the fintech revolution (and a scantily-clad rhinoceros)? This shift in skills mix – bringing back-office and platform expertise to the front of the priority queue – is the precursor to the next stage in process re-engineering and the operational analytics that will ensure the evolutionary integrity of those workflows. Though the catalyst for these back-office headcount increases is in response to new governance, risk and compliance (GRC) requirements, we believe that the focus on post-trade workflows will lead to greater sensitivity to efficiencies – which will spawn a greater awareness of the need for measurement and analytics.

These dominoes have already been falling for a while, mostly unnoticed. If you remember a company named Citadel Solutions – which later became Omnium in 2009 and which was later sold to Northern Trust in 2011 – then you are at least vaguely familiar with the concept of operational alpha. This venture in the hedge fund administration space was based on the broader vision of hedge fund heavyweight Ken Griffin that bringing operational agility to the full trade workflow, and with particular emphasis on the post-trade / back-office segment of the workflow, would ultimately improve overall economic performance. In some ways, this was Citadel both sharing and monetizing what I consider to be the primary source of their true special sauce: processing.

Around this same time in the early post-GFC era, another example of this vision came from Till Guldimann (then Vice Chairman of SunGard) who was then traveling the globe to evangelize the benefits of operational analytics. These are essentially the navigational tools necessary to tune a process or workflow. Many of SunGard’s solutions were uniquely positioned to measure various trade process efficiencies for such tuning.

Today, not only the anecdotes are becoming more numerous but the data is beginning to pile up, as we have sampled here. And, there are numerous other examples. However, by our estimation, the greatest impediments to achieving more efficient workflow (and enterprise) transformation are related to data and tools. Whether by the more digital (read: radical) path of process replacement or the more common path of process re-engineering, market players need better navigational tools to make it happen. Increasing awareness of the need for operational analytics development and usage is central to the unfolding of this next phase.

As the landscape shifts in this direction, we will certainly upgrade the corresponding imagery to something far more nubile…